You’ve gotta make room for a band with as much heart as Hunter Valentine – the all-girl four-piece’s new album ‘Collide And Conquer’ is bristling with satisfying melodic choruses full of emotional turmoil presented through the colourful range of the lead guitarist, vocalist and founder Kiyomi McCloskey. 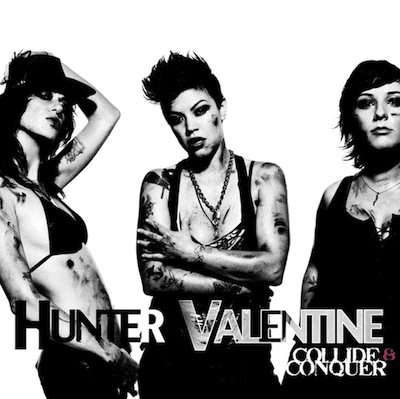 There’s all sorts of stuff going on here. There’s heavy touches of the sixties and seventies – The Rolling Stones et al – combined with modern additions that we hear in such tracks as ‘The Pulse’, which stays behind the 2000 fence, but threatens to transition over into the indie of today. It’s all over the place, with soft slow tracks and upbeat energetic ones to compliment them.

The first two tunes have many traits of the golden years of rock, although they completely contrast each other. ‘Liar Liar’ gives us the energy while ‘Lonely Crusade’ provides subdued emotions. This one could be a slow burner for some, but there’s plenty to be enjoyed, it’s a well-paced track with some skilled work from Laura Petracca who knows just when to switch the beat.

‘Crying’ is where the emotion really kicks in, the tone of the vocals portrays the feeling perfectly, the soft keyboards towards the end a great addition to this. And with ‘Little Curse’ there’s speed, speed, speed! It begins with a jittery electronic sound and launches into fast drum beat and screams. You can just feel the frustration! As the shortest track on the album, it’s just the right length. And yes, sh** does indeed happen.

Faded drums and acoustic, with a dominating lead follows with ‘Nowhere To Run’. It builds thicker and thicker until the chorus kicks in, and it’s just as strong as the others. This one is driven solely by the raw instruments, in contrast to ‘The Bull Rides Tonight’ that starts with an eighties style electronic keyboard, and leads to a gentle combo of galloping drums and bass, and towards the end you’re confronted with some powerful screams. Speed takes the stage again with ‘Gates Of Hell’, which has a strong punk vibe, and a nice solo, followed by, in this listener’s opinion at least, the two most powerful tracks on the disc, the strong and heartfelt ‘Ted’s Collision’ and the jumpy and bouncy ‘Priscilla’ which not only gets your head moving, but has some wonderful harmony. It’s feel-good and emotional at the same time. The final track is soft and morose, and compliments its predecessor effectively. The snare drum during the choruses is just as hard hitting as the melody, and the abrupt ending leaves you eager for more.

In conclusion, this is pretty damn good. It’s mostly tame and soft, but it captures the energy where it needs to. The harmony between chord and vocals is spot on, too. Plenty to enjoy, especially for the fans of the oldies!