Billed as an ‘atheist rock band’, †Hymns† are neither Christians nor satanists – it may sound obvious or patronising to point this out, yet it’s important to bear in mind when exploring this two-part album. 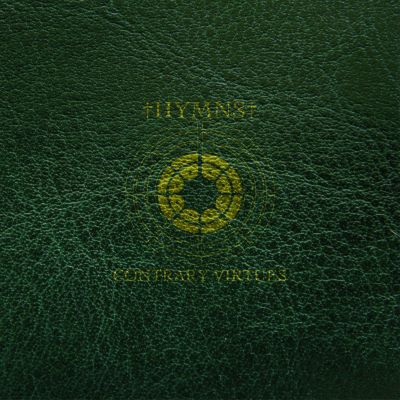 Religious iconography figures prominently throughout the lyrics of the sixteen songs contained on ‘Cardinal Sins/Contrary Virtues’, but every blatant or oblique reference is subverted in its delivery. For example, ‘Repent And Rebuild’ sees vocalist Sam Manville command the listener, “Don’t put your faith in the Lord, he’s not listening, put it in me.”

The first eight tracks, bracketed as ‘Cardinal Sins’, have an evident recurring motif of seeking penance. ‘Perseverance’ could be the final call for redemption as the Apocalypse dawns, while ‘With Patience’ touches on the Deadly Sins of pride, covetousness and anger.

A church organ and persistent drumbeat heralds ‘Miracles’ and the second half, ‘Contrary Virtues’, treads a more tender, reflective path with surprise twists in the concluding tracks; an echoey piano riff and trad-jazz drums on ‘Diligence’, an impassioned vow of dedication on ‘Terms Of Endearment’, more stripped-down piano and a finger-snapping accompaniment on ‘Revelations’.

Manville’s voice oscillates from calm (‘Wicked Tongue’, ‘Honesty’) to frantic (previous single ‘A Punch To The Temple’, the end of ‘Tristitia’) in parts, suiting the lyrical landscapes of each track and the sonic progression of his guitar and Pete Reisner’s drums.

Bookended by instrumental church organ pieces, this intriguing collection of songs is delivered fervently in its voice and its rhythm, questioning the concept of religion rather than dismissing it. One hopes the album is heard in the open-minded manner it’s intended to be listened to.

‘Cardinal Sins/Contrary Virtues’ by †Hymns† is released on November 14 through Function Records/Big Scary Monsters. More information on the band is available on their Facebook page.