CD Review: I, Parasite – ‘The Sick Are Not Healing’

“Experimental” is not a descriptor that many bands use correctly. It’s too often used instead of the somewhat more honest: “this band can’t play any instruments” or indeed: “this act doesn’t understand music theory”. So it’s with a little trepidation that we slip the latest offering of New York based self-proclaimed experimental band I, Parasite into the CD tray. 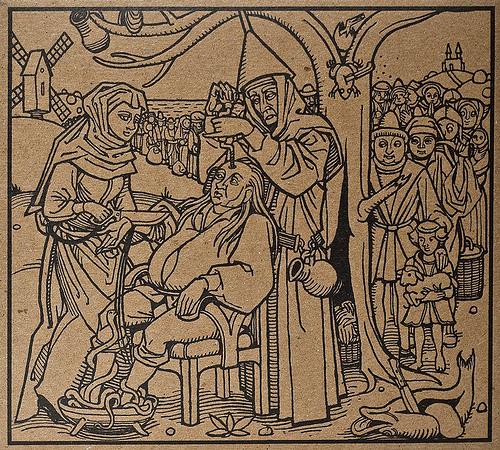 To be fair; it should be good experimental music, given the band’s seven-year gap between this and their prior album. And it’s not like the band don’t have enough musical experience, either. Plus, the CD sleeve rocks. Apparently it was hand-printed in 50-year-old letter press; possibly by genuine leprous monks. Or maybe not; but that’s the kind of feel you get.

It’s a little hard to gauge albums of this kind at any early stage in the proceedings: It seems almost mandatory to kick off with something enormously subtle, and then punch you in the face with track two. We’re often left with the feeling that it’s not until about track four that band gets around to saying what they really want to say: The heart of their ethos. And so it is here. ‘Unwanted Visions I’ resembles a medieval recital, while ‘Oppressive Repulsive’ ramps up the thrash factor. It’s good, but it’s peripheral to the band’s real message.

‘The Stone Doctor’ starts so quietly that it has you reaching for the volume control, before, somewhat predictably, upping the decibel threshold and settling into a wavering, catchy-as-hell feedback-driven melody that gives way to a screaming crescendo. Now we’re getting the the real thing!

Normally, we’d try to give a more track-orientated guide to an album, but this tactic is constantly foiled by the album’s construction and the way it washes through you. Tracks wander and waver hypnotically, and then seamlessly fold into the next track. Before you know it, three tracks have passed, but you’d struggle to define exactly where they were punctuated.

Even though the individual aspects of the album are so different –  thrash and then, vast gulfs of whisper-like strains, masses of static and feedback alongside complex and harmonious melodies – they are blended well, and the transitions aren’t obvious. If I had to pick out a weak point it would be the screaming vocal elements: It’s been done, and somewhat cheapens the emotional experience. This band achieve far more with their instrumental crescendos than their vocal ones.

I, Parasite make brilliant use of feedback and discords in such a way that they become central instruments. In places it screams, in others it warbles and murmurs. Brilliantly and originally; in some places its use mimics a reed instrument, and is used to convey that medieval feel prophesised by the album’s cover.

This is definitely listening music. Proper listening music, designed for a nice hi-fi and a vast leather chair, as opposed to, “play it on the way to work’ music. After the album settles in, it’s utterly absorbing and interesting; coherent and clever. When the the disk comes to a close, it feels like being snapped out of reverie. This isn’t an album we’d listen to anywhere but at home, and perhaps only a dozen times a year, but it’s certainly worthy of attention; especially if you’re interested in musical structure and hearing something interesting.