A few albums down the line, one would think that any band would struggle to keep their music sounding fresh, but this is not a problem for IAMX. ‘The Unified Field’ is the latest ambition by this one piece supernova; a journey of galactic and emotional proportions condensed into twelve unique tracks. Chris Corner, the brains and sultry voice of this musical phenomenon, teams up with Jim Abbiss, who produced work by the Arctic Monkeys and Adele, to create an album that perspires the quality and brilliance that both individuals are attributed to. 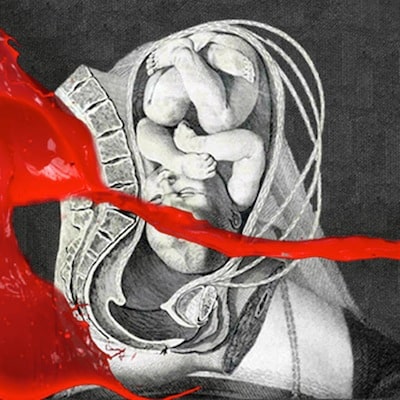 The opening song ‘I Come With Knives’ starts with the familiar, low, electronic synth noises IAMX has sewn through most of his music. Then comes the haunting sound of hymn-like whispers, breathing out lyrics in German. From the depths of the song rises a pumping beat, culminating in Corner’s falsetto notes bringing the song together. Once a false sense of security is made, the chorus bursts in, Corner’s voice nearly screeching, but at the same time perfectly sweet. At this point he has dragged you in, you are his subject, obediently hypnotised by his words and notes.

From there the album continues to impress. Sorrow is a futuristic serenade that cries with space-rock guitars and electronic sounds that plucks at the heartstrings. Macabre lyrics are made pleasant with oxymorons such as ‘Beautiful Anger’, sang with such emotion that has the listener sympathise with the pleasure in sadness. It is one of my personal favourites of the album, and no doubt will be on the playlists of depressed lovers for a while to come.

‘The Unified Field’ does itself justice as the titular track, bringing in a head-nodding rhythm and club friendly beat, as well as a catchy chorus that will stay in your head for days. This is a song that begs to be played late at night; lights flashing, arms in the air. Past the low bass sounds, a piano solo breaks out towards the end of the piece, a classical wink in a modern piece of art. Despite being four minutes in length, the song passes by almost too quickly, meaning the repeat button will be generously used, until you’re shouting out: “We are one in the unified fiiiiiield!”

The best thing about this album is the diversity of noise that churns out of it. ‘The Adrenalin Room’ is such a song, cranking in with industrial tones, echoes and riffs that Nine Inch Nails would blush at. This is the darker side of IAMX, a hedonistic fantasy projected onto music, with Corner’s poetic words embodying the mood: “My coarse heart swallows everything up like a black hole.” Beyond the beeps and buzzes that litter the song, there is a real sense of chaotic order. IAMX has created music that uses all sounds to its advantage, building a cyber-punk ensemble that stands out in the album.

Rather than dragging you deeper into the industrial labyrinth, the next track spits you out and places you on a cloud. ‘Quiet The Mind’ sounds like it belongs in a completely different album. We are introduced to softer sounds and acoustic guitar plucks, accompanied by singing almost croaked out. The whole style almost tip toes into psychedelic rock territory, but instead it drags you back, wraps its arms round you and hushes you. This calm nature has it become a lullaby for the lonely, swelling as it goes on, bringing in a drum, twinkles of a xylophone, from sleeping to dreaming. Then it climaxes, drifting back to silence, soothing and serene.

After experiencing the tranquil nature of IAMX, the tempo is upped slightly, with ‘Under Atomic Skies’ starting with a riff and rolling drum beat, sounding like the opening to a sci-fi Western. Images of post-apocalyptic wastelands spring to mind, as the song continues, more elements are brought in: a hi hat strikes, deep brass sounds growl in the background, the rhythm becomes hurried and threatening. Then the singing returns, the energy used to highlight the implications of living ‘Under Atomic Skies’, a bleak image within a powerful song.

Screams begins with a more eerie feeling, old piano keys bringing in dark electronic drums and synths and lyrics about tainted innocence: sex and drugs corrupting a young girl. Then the chorus bursts in, high pitched and chilling. A female backup-singer reiterates the haunting tone of the song, before bringing back Corner’s operatic chorus. It’s the sort of song with such a pleasurable sound that we try and sing along, but fail to reach the impossible notes that Corner can achieve. The listener is conflicted, falling in love with a song that has such dark inspiration, but with singing that brings in the light.

The blips of spaceship sounds bring in a dark guitar riff, which introduce violins to the beat, accompanied by xylophone hits. This is the beginning of ‘Come Home’, the soundtrack to a tango in a sleazy latino bar. Each breath of ‘Come Home’ brings in a hum of strings that quickly fades, creating a song that would be more accustomed to a ghost story. The eeriness continues, with a solo from what can only be described as a Transylvanian gameboy acting as a means of bringing in the energy of the second half of the song, where a more noticeable beat appears, and the singing becomes more confident and alive. The strings throughout add a wonderful depth to the sound, making the song much slower and romantic; definitely a style that IAMX would benefit from using more of.

Keeping the spooky mood up, ‘Animal Impulses’ starts with the clinks of a musical box and singing with a delay, fading and whispering through each ear. This innocent enough introduction ends with the singing building up with a repeated echo, before dropping into a gritty bass riff and stiff drum hits. Eventually a tuba appears, adding a big, deep beat, followed shortly by a flute solo, creating a march through the streets, to pertain to the lyrics suggesting we are led by ‘Animal Impulses’. The use of big band instruments adds a satirical tone to the song, creating a regimented beat for the animalistic nature of war, as well as sounding awesome!

‘Walk With The Noise’ has all the elements of a modern rock song; guitar strokes, partnered with riffs created by a synth complimenting an energetic beat. The chorus brings in a loud, memorable moment of guitar feedback, loud singing, with choral voices crying throughout. Compared to the rest of the album, this is one of the more simple songs, but by no means is that a bad thing. Its predictability and conventional structure makes it more accessible and appealing to less adventurous lovers of music, a welcome break in an experimental masterpiece.

Turning its back on convention and returning to the land of the Western, ‘A Land Of Broken Promises’ brings back the spooky style set up by the rest of the album. A female voice bursts in, violin and maracas following her notes perfectly. A Spanish guitar strikes up, a howl cries behind it. The lyrics speak of a Johnny Cash-esque story, but the feel of the Old West dissolves once the ever-growing notes of a piano climax with claps and bass coming in, becoming ever so slightly distorted, along with the singing, offering a twisted reflection of the traditional Country style of music. The female voice returns for a solo, bursting out an emotive verse. Then, out of nowhere, the quick and crying strings of the violin brings forth a solo so intricate that it would win a golden fiddle. The piano ends the song, bringing the funky noise to a resounding close.

‘Trials’ has the album come full circle. A calm finale, the beat softly walks in, a tender voice speaks just above a whisper, a modest speech within a masterpiece. Piano keys echo, floating through the music, until a big drum hit lets the song expand. The piano keys become more frequent, the song gets louder, more proud. The song is evolving, it gets more confident, the singing is more a shout now, there is a continuous distorted synth sound lurking beneath the song, the electronic influence carries this farewell. Long moments without singing have you appreciate the composition, the last hurdle ending with an almost improvised segment of chilled tranquility, fading but not ending. The lyrics offer a poignant conclusion for the album: “My trials are my friends, I can only win in the end.”

The entire album retains the diverse and ever-changing nature of IAMX, something most musicians are not brave enough to do. It embodies the brilliance that comes from branching out and perfecting different styles of music, and means that there will be at least one song you will be playing over and over again.