Leeds-based rockers The Idol Dead really do not live up to their namesake. The anthemic and energetic refusal to submit to the dreaded second album “curse” in ‘Dark Little Hearts’ is a triumphant celebration of daring riffs, powerful vocals and inspiring execution. Like good rock music? This is it! 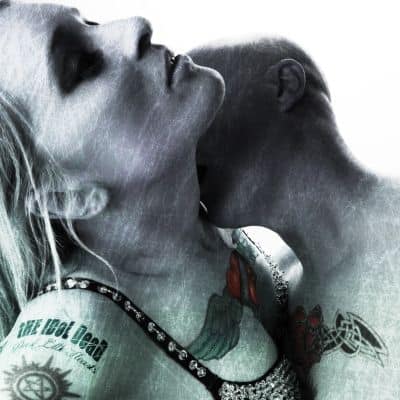 The Idol Dead manage to incorporate a large variety of genres and styles into their songs, which is a refreshing thing to see. Polly Phluid’s passionate vocals are similar to Billy Lunn [The Subways], if Billy Lunn was very angry, so angry that he decided to start a new band to demonstrate just how angry he was. The bass lines are as big and powerful as their provider, carrying the songs along on a wave of undeniable presence. Bring in the guitar riffs, able to get any audience jumping, and you have the new release from The Idol Dead.

The album offers thumping chants from start to finish, and the gentle acoustic offering of track seven ‘I’m Drowning’, featuring Claire Cameron [Claire Cameron Band] as guest vocalist, shows that the northern powerhouse of punk are plenty more than a one-trick pony. It’s no wonder their army of supporters, known as iDolls and iDudes, came out in their masses to order and pay for the album early, meaning the band could keep up their independent attitude by releasing the album off their own label, Raaa! Records.

The opening track, ‘Blue Skies’, gets the energy pumping from the beginning, and the momentum isn’t lost until the end of the last track (apart from the aforementioned pit-stop that is ‘I’m Drowning’). For us however, the utter togetherness of the thumping chorus, and some seriously slick guitar, makes ‘Dion’ the album’s triumph. We can picture the unified chanting of “Dion! Dion!” rocking venues all over the country. Track 11, ‘Beautiful Disaster’, has an intro showcasing fluid electric guitar skill, doing justice to the tracks that come before, rounding the album off in brilliant style.

The boys from Leeds have done it again, rewarding their fan base with another brilliant record, and undoubtedly recruiting more iDudes and iDolls along the way. Great albums are something to behold, but great second albums are even better.