CD Review: In This Moment – ‘A Star-Crossed Wasteland’

Californian metalcore mob In This Moment are, as it were, having a moment. In their five year career the quintet’s stints at Ozzfest guaranteed them considerable attention in the US, yet recognition has largely evaded them over here in the UK. However, since frontwoman and sometime Playboy model Maria Brink was pronounced The Hottest Chick In Metal by Revolver magazine in April of this year, anticipation for their forthcoming third album ‘A Star Crossed Wasteland‘ has reached fever pitch. 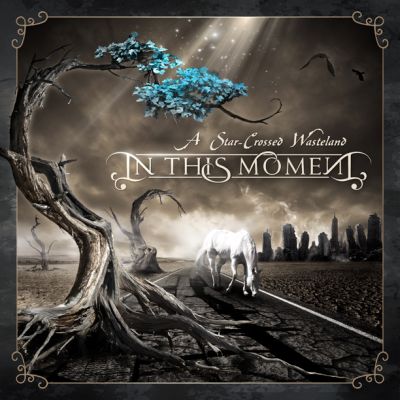 Drawing heavily on the theme of Westerns, (as previous album ‘The Dream‘ did with Alice in Wonderland) the record ricochets between a relentless metalcore assault and saccharine balladry, occupying a grey area of female-fronted metal somewhere between the hardcore stylings of Walls Of Jericho and the celestial gothic leanings of Lacuna Coil. Longtime Ozzy Osbourne collaborator Kevin Churko is responsible for production duties, which the band claims will return to the heavier roots of debut album ‘Beautiful Tragedy‘.

To christen it a cowboy concept album would be disingenuous given the technical proficiency and skilled song-writing, yet the lyrical themes and even wailing guitar solos rarely stray far from the wild west. Opening track and lead single ‘Gunshow‘ layers vulture calls and tumbleweed sound effects over Brink’s impressive screaming and grunting, providing a solid introduction to the next 42 minutes of listening. Tracks ‘The Promise‘ and ‘The Road‘ feature male vocal collaboration from Adrian Patrick of Otherwise, providing a throaty foil to Brink’s impassioned vocals. Her fellow musicians guitarists Chris Howorth and Blake Bunzel, bassist Kyle Konkiel and drummer Jeff Fabb are highly proficient in their fusing of heavier sounds with more radio-friendly rock, and seem content to inevitably play second fiddle to their buxom vocalist. Resembling Scarlett Johansson if she’d grown up in Camden, Brink seductively whispers her way through the spoken word track ‘The Last Cowboy‘ and howls ferociously over ‘Just Drive‘. Eponymous track ‘A Star Crossed Wasteland‘ and closer ‘World In Flames‘ consists of whimsical slow burning piano ballads, which whilst well executed stand in stark contrast to the fast paced metallic crunch of the rest of the record. Other than highlighting Brink’s impressive vocal capabilities, they seem flabby and redundant next to the sleeker, more refined ‘Blazin’ and ‘Iron Army‘.

‘A Star Crossed Wasteland‘ evolves into a developed, catchy record that is more likely to attract fans of other female fronted hardcore acts like Kittie and Flyleaf than convert fans of heavier listening. Its true strengths lie musically in the heavier moments, whilst it could be argued Brink’s voice is more naturally suited to her soaring, lush melodies over the squalling screaming. Regardless, this is a watertight effort of monumental proportions that will catapult In This Moment into the stratosphere.