Melodic death metal. On paper, one of the more amusing oxymora to be found in the lexicon of contemporary music. To be fair, it was, perhaps, inevitable. The cross-pollination, mutating and fusing occurring in alternative music, now and over the last decade, has bequeathed us a bewildering assortment of tags to hang upon every band brave enough to expose themselves to journalistic scrutiny. When considering the particular pigeon-hole into which Japanese Voyeurs ought to be stuffed, however, one can imagine a migraine of almost hemorrhaging proportions. Alternative metal? Punk? Grunge? Post-grunge? 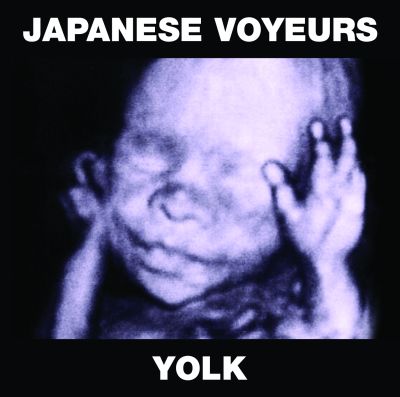 In many ways, ‘Yolk’ reeks of the beer, vomit and assorted bodily fluids that stained the ether of New York’s legendary CBGB. In others, the approving nods of Courtney Love can almost be taken for granted. There are many others, too. And yet, it doesn’t matter. Really it doesn’t. Every young band has their influences, consciously and unconsciously, and in a discussion with a fellow hack recently, a certain amount of sneering was enjoyed regarding those journos who trot out “derivative” whenever a band dares to wear its musical heart upon its sleeve.

Don’t be getting the idea that ‘Yolk’ is some sort of rip-off, though. Far from it. Christ, no. The aforementioned references are merely the springboard from which the London-based quintet launches into an all-out assault on the preconceptions of the timid and the narrow minded. Opener, ‘Blush’, twists the mind with a vertigo-inducing salvo of radio static before front woman, Romily Alice, demands you stop anything you may be doing and listen to her. Now, dammit. The voice is sultry. But dirty too. And dangerous. Like a Barbie Doll in stockings with smudged eyeliner and a switchblade.

The band absolutely hammers through the album. First an old-school punk riff (‘Cry Baby’) – all Johnny Thunders smeared over The Ramones, then a Seattle-styled artillery barrage of fuzz and distortion (‘Get Hole’). The voice moves effortlessly from smoky seduction to screams of rage, like a psychotic Kate Bush, and then, just like that, the little-girl-lost reappears (‘Dumb’) as if Bad Barbie had never existed. A kaleidoscope of styles, genres, hinting at things past yet, somehow, the music always much more than the sum of its parts. Cross-pollination rarely sounds this good.

One of the most enjoyable aspects of ‘Yolk’, though, is its lyrics. Without giving anything away, there are some jaw-dropping, and quite inspired, couplets scattered across the songs. Penned by Romily Alice, the band’s official word-smith, we think you’ll find them thought-provoking, amusing and, ah, challenging, too. And so will your mum. The album batters to a close, courtesy of a biting, mocking slab of irony called ‘You’re So Cool’, exiting on, it seems, the same discordant, white-noise static with which it started. Brutal, beautiful, twisted and ugly. And heavy? Hell, yeah.

Good luck with finding a pigeon-hole for these anarchic new generation terrorists. Us? We couldn’t care less what you call ‘em as long as you buy this album. Now. That was an order, by the way…