This release starts with a complicated beat for ‘Voltsmusik’; one so weird and booming that if you were at a club experiencing it as a fan of electronic and industrial sounds, you would find it difficult to catch and hold on to, but once it grabs, it’ll hold on. The first problem here is that K-Nitrate never quite grip on hard enough to their audience for the whole of ‘Stark Punkt’. 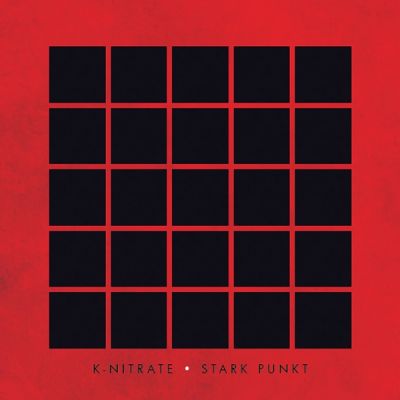 The second problem, is that the tracks sound very much alike and for the the most part this record sounds like a Combichrist bonus disc. The ‘Stark Punkt’ EP has six new songs and three remixes that won’t necessarily blow your mind but will certainly work well within an electro-industrial club setting. The music is well produced, but the lyrics are too vocoded to understand throughout, and overall this makes it quite dull and repetitive at times. ‘I.E.D’ may cause a stir though, with its 80s-style electro riff and heavy beat. This EP could even be seen as a TBM (techno body music…innit?) version of any early Moby release, with rings of ‘Next Is The E’ and ‘Go!’ reflected on its surface.

The remixes on offer, are of tracks from ’94 release ‘Xenophobia’, with ‘SDK (Electrification Death Mix)’ being the stand-out rework. The recording ends with its penultimate track featuring UCNX as a guest musician – this artist gives the release a more “human” tone. All-in-all, K-Nitrate have made a decent record that you will enjoy if you’re into pure industrial stuff, but six tracks is enough for us. The band will have to show more variety as they approach their next full-length record.