When I was 15 I would have bought the new EP by Karn8 based on the cover alone, featuring as it does, lead singer Kirst all wide-eyed and cleavage covered in cake [don’t look like cake to me Steve -ed]. As an adult my standards are, hopefully, a little higher. This fourth EP by Reading based three-piece Karn8 is a four track affair of widely differing tracks. 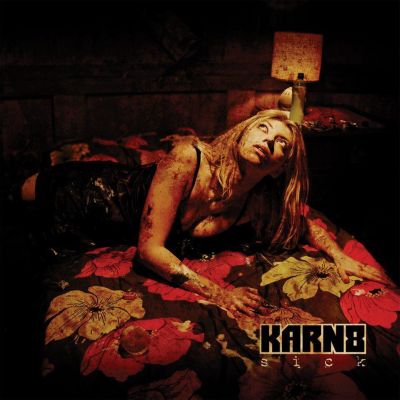 Let us start with title track ‘Sick’; it’s a breathy track backed by heavy riffs, it brought to my mind not the press release suggested influences, Hole, but more a dirty version of a Garbage track from their early days. Please don’t take that as a criticism, Kirst has a cracking voice and the rest of the band are clearly very talented. ‘Sick’ seems like the kind of track which could indeed break a band, maybe feature the vocals slightly more than the riffs and let the song speak for itself. A greatly enjoyable slice of post-grunge rock. I can see the video becoming a huge YouTube hit, featuring the attractive lead singer Kirst, playing to the camera and ending with her giving sweet-toothed men heart palpitations! Definitely a track to re-introduce the band to the world.

The rest of the EP is a very mixed bag, of styles at least. All three other tracks are of a good quality, even if the band can’t seem to decide what suits them best. ‘Change My World’ is a much more upbeat, aggressive version of the band, with some excellent guitar work. To this writer’s ears, this is the stand out track on the EP, reminding a little of The Subways, only with a slightly harder edge. It showcases the undoubted ability of the two bearded men behind the hot singer, and gives her voice something to do; this should translate well live.

The third track on the EP is ‘Stuck’, a song which starts off like the entrance music of a wrestler in the late 90s, before blending into something more ethereal; a great big heavy groove topped off with something… slinky? If ever a genre needed inventing it is this, slinky and filled with angst, and yet altogether beautiful. Rounding out the EP is the gloriously nihilistic ‘Nothing’. A pulsating drum beat with Kirst’s almost whispered vocal over the top leaves the ears feeling slightly battered and bruised, but in a good way! Again, like a filthy version of the band Garbage could have been… Karn8, I suspect, will be a band to watch over the next year or two; musicians who can rock, a singer who can sing, finding musical chemistry with each other? Works for us.