‘Monster’ is an awesome return-to-form from the NYC rock legends KISS, and quite possibly your new favourite album to break out on a Saturday night. 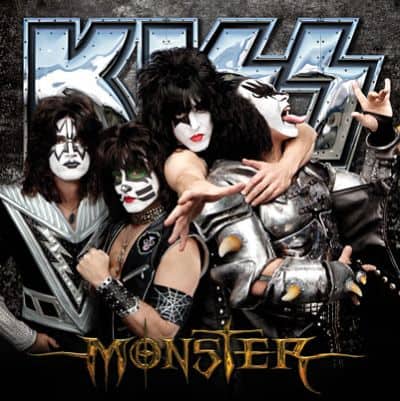 The album is a brilliant mix of classic 80’s rock ‘n’ roll, ludicrous humour and over-the-top presentation that KISS just do so well. Filled with party anthems and explosive rock, ‘Monster’ is a true soul successor to ‘Sonic Boom’ and the band’s earlier, truly iconic work.

The band have been busy since the 2009 release of ‘Sonic Boom’ promoting, perfecting and experimenting with this newest release, and both the band and any KISS fans out there will surely be satisfied with the outcome, especially as it captures all of the energy and excitement of the band, and compliments an entire career of accomplishment and innovation. Anyone who has ever seen the spectacle of a KISS show will comprehend the enormity of the band’s stage presence, and the album is an impressive window into the upcoming tour.

We were instantly excited at the release of this album, and now we’ve heard it, we’re addicted. It is a sensational effort from a band that have truly found their unique style, and perfected it, without resorting to mixing in dubstep, or selling out to adhere to fleeting trends (can you honestly imagine that though? Kiss-step! Ha! – ed). The album will resonate perfectly with die-hard KISS fans; the awesome foursome have no need to change direction and plough forward, the masters of their craft.

Instead of experimenting with new styles like other post-reunion KISS albums, this is all about going back to basics; cocky, brash and catchy rock ‘n’ roll. And pure rock ‘n’ roll is definitely what this album is. Stolen straight from the 80s, reeking of hairspray and bourbon, some of the tracks are instant classics, from the frantic riffs to the high energy drums via the get-drunk-and-sing-along vocal work. The entire album is innovative, chaotic and far from serious, a testament to the band with a brilliant, self-deprecating sense of humour, and this rings through the whole release, especially in Paul Stanley and Gene Simmons’ lyrics.

The album is not without fault, however, and despite being a good effort all round, suffers due to a few hit-or-miss tracks that lack direction and energy. The rock demi-gods can’t be held responsible however, as ‘Monster’ is their twentieth album to-date in a career spanning three decades, and therefore a slightly repetitive release is not surprising.

The only major let-down is that the release is not as diverse as it could be, but aside from a few tracks that distinctly lack in originality, the album is strong throughout. Since the original line-up split, with drummer Peter Criss and guitarist Ace Frehley being replaced with Eric Singer and Tommy Thayer respectively, the band have promoted a lot larger, heavier sound that has been reminiscent of Poison and Alice Cooper, mixed in with Stanley’s rude and crude vocals and Simmons’ ripping bass-work.

Tracks-wise, this album kicks off in a huge way, with monstrous, supercharged riffs, an iconic chorus, and the brilliant return-to-form that KISS fans worldwide were hoping for. ‘Hell Or Hallelujah’ is the opening track and the first single from the album, and it is definitely one of the better tracks of the album. With a pounding beat and a memorable chorus, this is classic KISS. Certain tunes will leap from the tracklist and become instant favourites: ‘Freak’ is a belting, chant-along classic, ‘Back To The Stone Age’ is bursting with excitement, and ‘Take Me Down Below’ is a party anthem, something KISS do best. Meanwhile, ‘Wall Of Sound’ is a combination of all of their technical ability and style, with a bursting riff and incredible solos, and is a perfect example of a band with great staying power; staying true to their original fans.

However, some tracks do pale by comparison, and ‘Shout Mercy’ distinctly lacks energy, and ‘Long Way Down’ feels like a lull in pace towards the end of the album. On the whole, it maintains the energy throughout the release, and the band demonstrate their versatility, and although perhaps variety isn’t their greatest strong-point, shredding old-school riffs definitely is.

‘Monster’ is well worth a listen, and a definite must for the ultimate 2012 Halloween mix-tape.