A cornerstone of the industrial rock scene, KMFDM are a brutal music-making machine, having spent quarter of a century creating a string of thumping, grinding albums at a truly impressive rate. Last year saw the unleashing of ‘Blitz’ – their sixteenth (!!) studio album – and following it up this year is the somewhat predictably named ‘Krieg’ remix album. This isn’t a ‘normal’ remix CD though: KMFDM have rounded up some of the biggest names on the scene for the job. 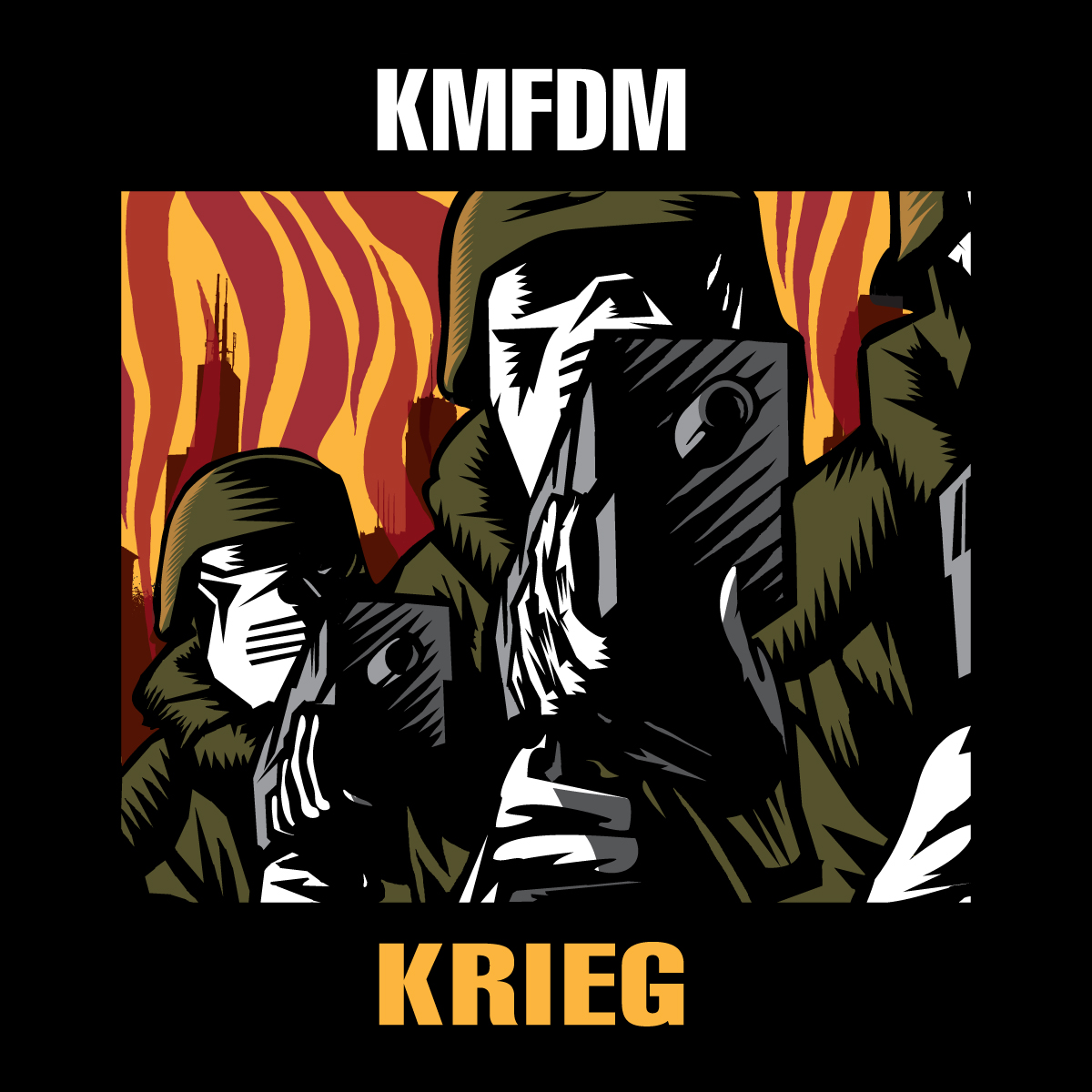 You don’t have to actually like KMFDM to want this CD, because someone you admire will have worked on it: Tom Shear, Sebastian Komor, members of PWEI, NIN, Combichrist, and many more. Frankly; it’s hard work not putting it on for the first time and skipping straight to your favourite name.

Combichrist’s Andy LaPlegua fires the opening salvo, and brings to ‘Bait and Switch’ exactly what you’d expect; turning it into a massive, remorselessly pounding industrial dance number. Later in the album Tommy Victor (Ministry) gives the track a dose of his medicine by way of heavy guitar riffs, creating a fantastic driving song.

A complete surprise next: KMFDM’s own ‘Disco Balls’ remix of ‘Strut’. Reminiscent of Rolls Royce’s ‘Car Wash’, this is a funked-up cheesy disco monster of a song which shows a real sense of humour. I absolutely love this. Following it, the Dan Kirkhus (Seismologist) remix of ‘Potzblitz’ is, aside from German vocals – very reminiscent of recent dark, brooding Gary Numan tracks.

‘People Of The Lie’ was originally a grinding, dirty track. Ian Hoxley (Apollo 440) quietens it down and turns up the treble; creating a flowing, gently pulsing sound. Koichi Fukuda’s (Static-X) mix goes a step further; ripping out most of the remaining synth strains, replacing them with a piano, turning the vocals down to a seductive whisper, and creating what is essentially a chill-out track.

PWEI’s Graham Crabb has remixed ‘Bitches’, bringing in a whole bunch of drum loops and making less of a club song and definitely another one for the car.

‘Davai’ was originally an aggressive, typically KMFDM number, while Tom Shear’s variant kicks off with an unashamedly NIN-esque sample and vibe, before descending into a rather retro-industrial sound. Chris Vrenna (NIN, Marilyn Manson) on the other hand has gone for a heavier, more guitar and drum led industrial reworking.

‘Krieg’ is a really interesting CD. In addition to some fairly routine remix tracks there are more than a couple of mixes that really add to (and in some cases outshine) the original material. There are also some genuinely surprising re-inventions which take tracks in new directions, or show a side to the producer which you simply weren’t expecting, and this is the facet of the album that I’ve enjoyed the most. This is more than a remix album, and it’s about more than KMFDM. So if there’s a name on the credits that interests you, it’s certainly worth a listen.