The necessity of a string-laden intro track is one we wish to question. Lahannya’s new album ‘Defiance’ is guilty of this spooky-yet-redundant sin and we can’t help feeling it should have been the first genre convention they defied. It serves only to delay the moment of first contact with the real substance of the album and leaves us wondering whether they’re trying to stall us? 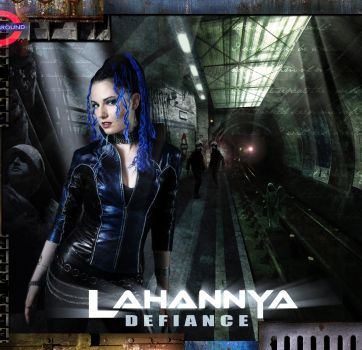 Eventually we make our way to the real substance of the album, starting with ‘Dying Inside‘. From the off we’re put in mind of Rammstein’s newer offerings – there’s a decent lode of industrial rock to be mined here if we’re any judge. Things aren’t all that they seem, however; just when we’re expecting the gruff growls of some sweaty Till Lindermann soundalike to kick in we’re thrown a curve ball in the form of some tuneful crooning from Lahannya herself. This changes the game somewhat.

The album continues with ‘Sick and Tired‘ and ‘Brave New World‘ which both introduce slight variations on the established theme without deviating too far. There is a sprinkling of Kidneythieves-esqe electronica to be heard while the rock-driven guitars and drums continue to provide a solid backbone for the vocals. Good, old-fashioned singing is the order of the day – there’s nary a grunt in sight.

The rest of the album follows a very similar formula which isn’t necessarily a bad thing – ‘If it ain’t broke’ and all that. But allow me to pour some treacle into the gears of this industrial machine. The whole thing comes across as rather generic. It’s solid – we’re not denying this – but it’s nothing new. Layannya’s vocals are extremely competent but never amazing. The guitars follow predictable progressions and after listening to the whole thing we can’t help feeling it could have been something more.

If you’re a fan of Rammstein or Kidneytheives or perhaps, if you’re looking for a solid example of the industrial rock genre I can recommend checking out this album. If you’re looking to be amazed by something new and exciting I recommend looking elsewhere.

We will look forward to seeing how Lahannya’s sound progresses over future albums.