Before we reviewed this disk, we knew that Left Spine Down were good and that they are on the cusp of a major break-out in the States and internationally. We knew this because their ‘Download’ has received some rave reviews and great acclaim. This, their remix album for said effort sees them enlist the help of some serious heavyweights on the Industrial and alternative scene the world over to rework their impressive catalogue and it should see them catapulted onto the big stages with the strobe lights that they deserve. 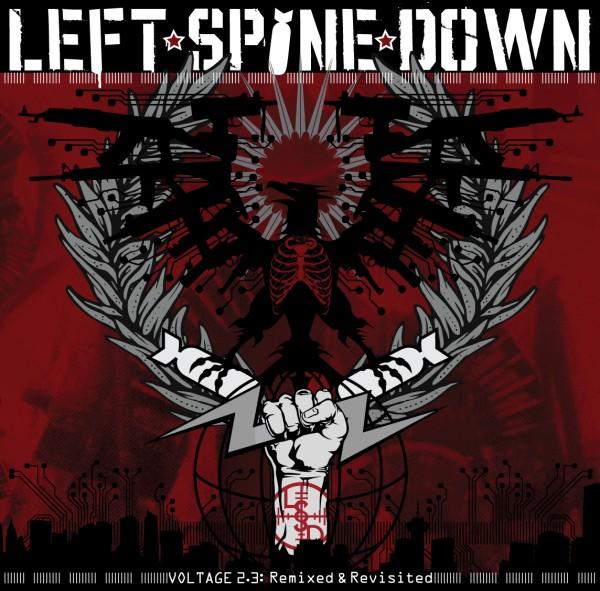 ‘Tape 8: Worm Holes’ is a characteristically noisy and disturbing lead into the infectious and powerful ‘Reset’ remix by Seb Komor of Melt which sets this time-bomb a’ ticking in splendid motion with its stomping metallic fury.

The ‘Prozac Nation’ mix by Tim Skold is up next and it takes LSD’s electro-metal masterpiece and turns it into a solid Industrial club-dancefloor filler comprised of pop-rythms and a unique EBM-styled sheen that only someone of Skold’s calibre could provide.

The ‘Tape 4: Test Subject Phase 1’ is the second of many breaks in pace on the album, providing a breathing space in the lead-up to a suitably dark and heavy cover of legendary Northern UK rockers Joy Divison and their track ‘She’s Lost Control.’ It’s a very impressive rework and it should prove to be incredibly popular in the live arena. The chorus really sticks out as it manages to take on the emotion, passion and grit of the original and turns it up to 11 with furious guitars and raucous beats for a truly deserving standout.

The heavy-as-hell ‘Hang Up’ (Cracknation mix) is given a serious D&B makeover by DJ? Acucrack that should delight DJs in any self-respecting dance club. Clever beats mix with driving synths for a very tasty track built to entertain the masses in a relaxed setting or on the packed floor. After ‘Tape 23’ cuts in; the KMFDM mix’ for ‘Policy Of Hypocrisy’ is up next. This glitchy-electro beast works on the senses for a few minutes with its varied pace and tone. One minute there is ferocious noise and then for next the listener is left in a trance-induced euphoria. XP8’s ‘Last Daze’ mix is the best one on the disk. The anthemic quality of the original remains intact whilst layers of new and dance-worthy electronics are added.

LSD’s cover of Nirvana’s ‘Territorial Pissings’ is a very good homage, and yes, it will more than satisfy grunge fans’ appetite and batter down any doubters pre-conceptions. This is near three minutes of cyber-rock n’roll at a break beat pace that you will find very hard not to enjoy.

The ‘Reset’ mix by Tokyo Industrialists Baal is a synthetic bit o’ awesome that will blow your mind. Unrelenting, brutal and punchy this will have you headbanging in your bedroom or in the street, perhaps even more than you normally would to the original track, actually. This is electronic body metal at its best and most relevant.

KMFDM’s ‘Flick The Stitch’ mix is of course a wonderful blend of heavy rock and Industrial influences mixing the originals solid guitar work and bouncy drums with some enchanting Goth-styled synths for a wonderfully attractive and fun reworking.

The Led Manville version of ‘Last Daze’ is a fantastic techno affair that will have your glowsticks flailing wildly. The original beats perfectly intertwine with the winding synths for a seductive track packed with melody. After ‘Tape 18’ we are treated to the new sounds of ‘Welcome To The Future’ which deals with voyeuristic themes and packs the trademark cyberpunk sounds and instantly accessible chorus that we have come to associate with Left Spine Down. The ‘Reset’ mix from 16Volt packs a hook and a half with some rock hard instrumentation moving perfectly in time with some cascading synthetic elements. The ‘Last Daze’ (Funland Mix) by The Birthday Massacre follows on nicely and it contains their trademark “fairytale” stamp and some grand vocals from Chibi to make this a great cover and a true highlight on the disk. The final track is a ‘Fighting For Voltage’ remix from LSD members Jeremy Inkel and Chris Peterson and it is a proud effort that demonstrates the quality of the original work but also the varied skills of the creators.

Now we can look forward to more original material. This a fine stop-gap before the LSD machine moves forward. You can’t stop it, and we are pretty sure that if you hear the original album and then this, or even the other way around, you will not want to.

Watch the video for ‘Last Daze’ below: