Reggae hero Bob Marley once famously said: “One good thing about music, when it hits you, you feel no pain”. Kurt Cobain, said to have suffered from a crippling stomach illness (kept partly at bay by his regular intake of heroin), music was a means for Cobain to transcend the aggravations of instant fame and a tumultuous life. We know only too well about the tragic ends which faced both Marley and Cobain, but for most, music continues to be an effective pain-killer. Just as song-writing was Cobain’s tonic, reggae music and celebration was bred from an undercurrent of anti-colonialism and black nationalism. 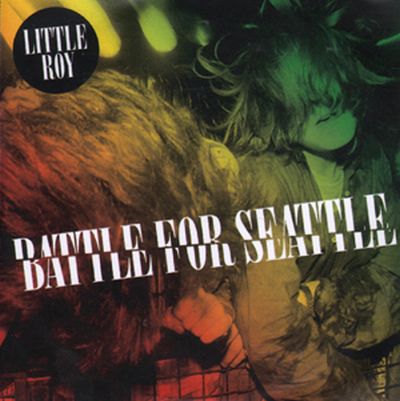 Difficult times were soothed with the influence of music. With these two important connections in mind, Little Roy, a veteran reggae singer who started his career in the late 1960s has tackled alongside Prince Fatty and Mutant Hi-Fi, arguably one of the hardest musical projects to pull off – the cover album. Despite the last decade being effectively the “live Lounge-era”, cover albums are viewed as the mainstay of bargain bins in supermarkets, often believed to be as lazy as churning out another “Greatest Hits”. However Little Roy and the gang have managed to pull-off a successful tribute to Cobain and co whilst keeping the true spirit of reggae alive.

To begin with, a frankly beautiful and highly nostalgic grunge-era album cover by Charles Peterson, (the very man who designed ‘Bleach’, Nirvana’s first album’s cover image) tinted with the colours of the reggae flag is the chosen album image. It immediately transports the listener to early 90s Seattle, Washington and the nucleus of all things grunge. Just as Jamaica continues to have reggae running through its blood, grunge elevated Seattle from a bleak, wet city on the fringes of the US to a place of legends…and ripped stone-washed jeans.

As expected, some songs work better than others. The opening seconds of ‘Come As You Are’ sounds distinctly like elevator music…though that probably says more about the muzak industry’s soul-crushing effect on pre-existing musical genres rather than reggae itself. Other songs like ‘Polly’ still sound hauntingly effective – using a melodious tune juxtaposed with lyrics of brutality for a new take on one of Cobain’s first jaunts into pop song-writing. ‘Son Of A Gun’ appears to be hand-made for a reggae makeover with lyrics more akin to a nursery rhyme rather than a Nirvana album, and this one doesn’t fail to raise a smile instantly with a glorious steady reggae beat. The odd one-word lyric change in the final track ‘Lithium’ does nothing to change the fact that it’s a wonderfully wistful and enjoyable version of one of Nirvana’s most soul-bearing singles.

It’s no surprise that Nirvana can stand the test of re-interpretation. MTV’s Unplugged series cast many doubters and critics to fall to the feet of Nirvana and revise their original misgivings about Cobain’s talent behind the Brad Pitt good looks and outspoken opinions. Just listen to Paul Anka’s swing version of ‘Smells Like Teen Spirit’ – rock has been subjected to far worse over the years. we’re glad Little Roy neglected to include ‘…Teen Spirit’ as we think it would have deterred the expectant listener from what the album is trying to do. It is not expecting to replace your entire alphabetised Nirvana collection and improve on any of their tracks, but stand alongside your collection as a tribute from one genre to another, just as Cobain unashamedly held up everything he ever wrote as an on-going tribute to every band and artist who had ever influenced him. Cobain spent most of his time trying to distance himself from the instant attention ‘…Teen Spirit’ gave the band – Little Roy, Prince Fatty and Mutant Hi-Fi have granted him that in their appreciation of Nirvana’s music.

For more information visit the official ‘Battle For Seattle’ website.