There’s something of a Marmite quality about M83. You either love or hate the sounds. The newest double album, ‘Hurry Up, We’re Dreaming’ offers no compromises. It is a collection of epic proportions. Anthony Gonzalez is a Frenchman, now living in LA – and you can almost tell – the album is full of American optimism, but it has a European experimentalist take on it; higher than the sky melodies with opaque lyrics. 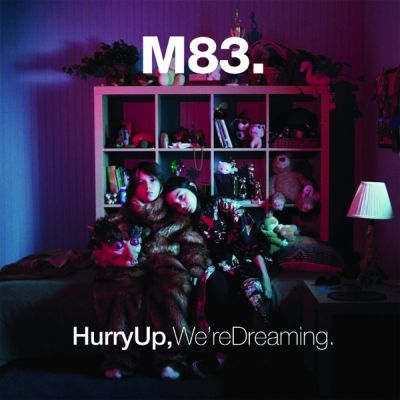 Gonzalez’s voice in this record is far stronger than his previous efforts. His inspiration was the confident stage presence of Depeche Mode and The Killers. Almost immediately you can feel this confidence from the first track ‘Intro’ where he sounds empowered and beautiful and eventually it becomes hard to tell which voice is Zola Jesus’ (what a nice guest to have, eh?) and which is his. Throughout the entire album you can feel Gonzalez’s motivation and excitement, and it fills you with optimism about the rest of the album.

One of our favourites is ‘Midnight City’ with its very catchy, dance-floor melody with a bit of sax thrown in. Yeah, we know what you’re thinking ‘saxaphone?’ but it works beautifully, and takes the song even higher than you imagined. And, that’s not a synthesiser we hear, that’s his voice, heavily distorted; it makes you delight at the affecting nature of this electro powerhouse all the more. If you can resist bopping around your room to this one, then our collective hat will come off for you. It’s one of the highest highlights of the album, we can’t praise it enough!

Another one of the tracks, ‘Raconte Moi Une Histoire’ sees a little girl telling the story of what happens if you lick a frog to the clicking of fingers and some synth beats and notes of guitar. Bright and innocent, it recalls a childlike curiosity about the world, and experimentation with music. This song absolutely distils one of the main themes of the whole album – childhood. However, it’s without question one of those pesky Marmite tracks that you may dig, but you might not, so be wary.

‘Steve Mcqueen’ is a fabulous track about, well, we’re not quite sure, but it is anthemic and will put a smile on your face. Turn it up real loud and you’ll get the best out of its spiky synth and harmonious vocals. Meanwhile, ‘OK Pal’ comes off like a funk-rock-electro party that you simply must attend.

‘Hurry Up, We’re Dreaming’ is a record that is optimistic and hopeful, though the lyrics are as unfathomable as ever. In summary, this album will inspire you to go out and live your life exactly how you want to by rediscovering that childlike innocence and curiosity. Anthony Gonzalez hasn’t settled for anything less, why should you?