Mix New York City swag and a touch of professional talent, along with a dash of high society glam and a pinch of sexy underground back rooms, to get the Brooklyn born rock group Machine Elves (ME). We take a look at the début album ‘Fancy Suits And Cigarettes’. 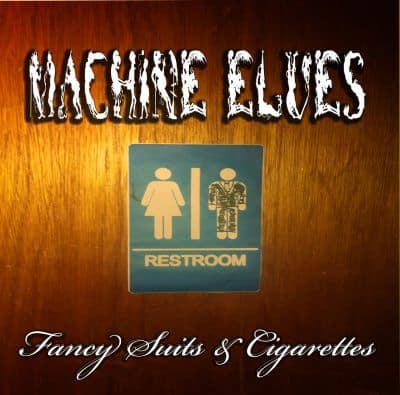 An electrifying party and an excitement so alive on stage that it escapes and floods into the audience, continuing the party from the opening of the set to the ugly lights. The lead singer’s hypnotizing hips and energetic talent, a megaphone, guest appearances by booty shakin’ hot chicks, and a band heavy in guitar and solid drumming, are more than enough to illuminate an entire room with soul, sleaze, and satisfaction. Every performance is like you’re invited to the biggest party of the year by the cool kids on the block. ‘Fancy Suits And Cigarettes’ is no exception.  Machine Elves début album shares the same ‘leave your keys and your pants at the door’ feel and works very well as a straight listen or a random shuffle.  It’s as if upon listen you’re transcended into a world lined in a brightly coloured circus tent, decorated with whiskey fountains, and all your best friends are already there: Drunk!  It’s rare that an album is as fun as it is professional. ‘Fancy Suits And Cigarettes’ pleases all the senses, and is a great first effort for follow up anticipation.

Imagine a roller coaster ride blasting Pink Floyd through a Queensryche concert while sitting next to AC/DC and Motley Crue.  Take that ultimate party soundtrack and light it on fire. ME’s first attempt is much more than just ‘sounds like’s’ and ‘reminds me of’s’. They’re a personality, not a genre. ‘Fancy Suits And Cigarettes’ travels through glam rock, pop rock, hard rock, and big ballad soft rock but always lands firmly in rock.  It’s an eclectic sound full of progressive night-on-the-town theme-songs for the ‘out to find trouble’ fan to the ‘trouble finds you’ fan.  The first track acts as a less than two minute warning and cautionary tale for the debauchery and mischief that may be elicited from the album.  In a Pink Floyd type whisper, lead singer Joey Calveri seduces and hooks the receiver with his tempting and taunting wordplay.  The self-titled ‘Machine Elves’ track sets up the rest of the album, and is the first exposure to the ME branded sound, twisting with unusual guitar riffs and big bold bass lines over lyrics tangled in emotion and high impact contagious energy.

The next few songs allow you to catch your breath before ‘Stripper’ hits halfway on the album.  It’s everything you’d hope a song by its name would be.  The way Joey describes the female body and the control she has on the pole over her audience is both empowering and dirty enough to make you turn it down at a red light.  The subject matter is fun, but the sound is absolutely solid.  Tommy Mitchell delivers on the drums, and Lou Larocco and Frank Fasano supply the guitar support, gritty enough for your high end strip club.  Howie Blatz offers a bass line to keep you moving like you’re ready to quit your day job.

Fancy Suits and Cigarettes plays like a challenge for your everyday singer and player.  Each song has a unique feel to it and suggests something entirely different upon each listen.  Meghan Murphy offers her sultry rock and roll vocals to ‘Prim’, track nine, on the debut, and echoes beautifully with Joey’s soft yet manly sound.  It’s the perfect back and forth you’d imagine hearing from a couple in an Upper East Side apartment (a swanky place to live).  Its charismatic exchange is so relatable and easily a favourite on the album.  Towards the end of the record you’ll find another favourite, ‘Something Just Snapped’.  Just in case the Machine Elves hard rock sound has escaped you with the fun of the previous tracks, ‘Something Just Snapped’ will remind you why the heart of ME is in rock and roll.  The ominous start to the song lends itself to a David Bowie meets Slash sound, and by the time the rest of the band kicks in your toes are already tapping and your head is already banging.  It’s the perfect ‘coming-down’ song from the party that is ‘Fancy Suits And Cigarettes’.

Do yourself a favor and check out Machine Elves while they are still accessible.  Talent like this is uncommon and refreshing in an unsigned band.  Singer Joey Calveri brings a style and posture to the stage, clearly a product of his experience, and a look unlike bands on the scene.  You can find him currently entertaining audiences on stage as Stacee Jaxx in the hit Broadway show Rock Of Ages.  Be sure to pick up ‘Fancy Suits And Cigarettes’ and catch an ME show the first chance you get.  You’re invited to the party, you’re invited to stay awhile, and you’re invited to push play and escape into a world of fun, fearless inhibitions, and funky rock all-their-own. It’s a Machine Elves world.  Grab your fancy suit and light a cigarette.  Stay a while.  It’s fun in here.