It can’t be easy being Dave “mouth” Mustaine. The sort of dude who, seemingly, delights in making life as hard as possible for himself, the number of corners into which he’s ostensibly painted himself, over the years, would make weaker men cry. Apart from anything else, the sheer volume of people the man has pissed off over the course of a particularly chequered career, means any Megadeth release will have the sharks salivating. Critics sharpen knives and peers line-up to put the boot into what they hope, this time, please, finally, will be the occasion the wheels come spectacularly off the ‘deth express. 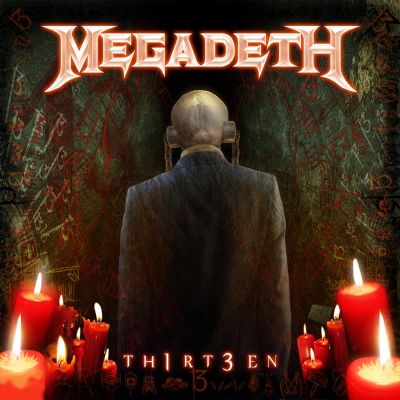 It’s a situation in which Mustaine thrives. Say what you like, the Megadeth main-man has balls of a size that could be viewed on Google Earth. So here we are again, thirteen albums into a career that many proclaimed over before it even started. Certainly, the sort of resurrection that that bought global acclaim and success after the Metallica firing, near-terminal heroin abuse and Christ knows what else must surely have had Jesus ‘phoning for tips. You can’t keep a good man down, it seems. Or, more likely, and despite his born again Christianity, the Devil looks after his own…

Anyhoo; ‘Thirt3en’ Any good? Well let’s say that while it aint no ‘Lulu’, ‘Lulu’ certainly aint no ‘Thirt3en’, either. And while some will welcome his former band mates’ brave experimental musings, we can safely say many more will welcome a Megadeth release that sees them near the top of their game doing what they do best. In many ways, ‘Thirt3en’ is Megadeth’s ‘Back To The Future’. Their legacy is celebrated in appropriate style with returning bass man, Ellefson, kicking off the album with a typically ominous riff which ushers in the Grammy-nominated, ‘Sudden Death’.

The glance backwards continues with ‘New World Order’ and ‘Black Swan’, previously encountered in demo form on ‘Youthanasia’ and the ‘United Abominations’ sessions respectively. Reupholstered and revamped, they fit snugly among the contemporary tracks and do a neat job of linking Megadeth then with Megadeth now. But the future is met head-on with ‘Deadly Nightshade’ and ‘Public Enemy No.1′ and the band sound fresh, revitalised and, if not as heavy as on ‘Endgame’, nevertheless as thrillingly intense as ever.

Ultimately, a successful work that showcases Megadeth’s classic trademark thrash while the commitment of the musicians and a snappy, crystal-clear production ensures this is no mere retread. ‘Thirt3en’ might be unlucky for some but, in typically perverse fashion, Mustaine has made it a magic number. We’d suggest those brandishing the hammers and coffin nails hang on a while longer. Megadeth is a long, long way from over.