Now here’s a stroke of marketing genius. When Tommy Lee joined forces with rapper TiLo in 1999, his nu-metal venture Methods of Mayhem spawned their self-titled platinum album. Despite disbanding in 2000, they have now reformed with an exciting concept. How to take over the world? Get the world involved! 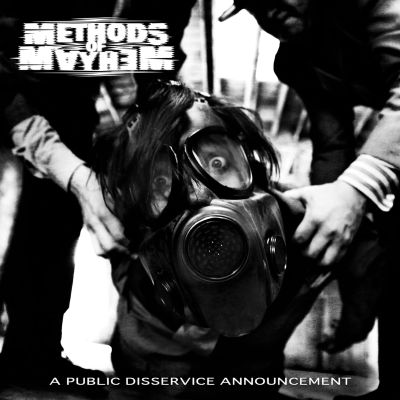 Having uploaded the core of each of the 11 tracks onto thepublicrecord.com, Tommy invited anyone and everyone to upload their interpretation of the raw sound. What resulted was a pick and mix of tracks chosen from the sweet shop of over 10,000 submissions, from artists all over the world. Those talented enough to make the cut have been credited, following in the footsteps of previous Methods collaborators including Fred Durst, Snoop Dogg and Kid Rock to name a few.

The expertly experimental sound of ‘A Public Disservice Announcement‘ consists of a motley (see what we did there?) of genres beginning with the upbeat, catchy and incredibly funny ‘Drunk Uncle Pete‘. This is then followed by the first single off the album ‘Time Bomb‘ which defines mainstream radio rock, with its well defined lyric-base and guitar riffs to tap your feet to, this song is very easy listening. Powerfully invocative ballads ‘Louder‘ and ‘Blame‘ follow in a similar fashion.

We are drawn in by the amalgamation of styles as each song has it’s own personality. nu-metal ‘Fight Song‘ throws a left hook with some impromptu Spanish rap. Compelling you to keep listening, ‘Two Ways‘ shows the evolution of the album as Tommy Lee fuses rock and electro with solid beats, riffs and vocals. This metamorphosis then progresses on to ‘Talk Me Off The Ledge‘ with dark, pleading lyrics and Middle-Eastern guitar twang, emphasising the character of each song.

‘Only One‘ could almost be described as two songs in one, with a battle within the song between guitarist and vocalist. Alternating from aggressive riffs to soft poetic rhythm, this track keeps you on your toes, drawing you in for the final third of the song which fuses the two for a unified finish.

The final three songs are the party tracks of the album with ‘All I Wanna Do‘, ‘Back To Before” and ‘Party Instructions‘ taking their influences from industrial while still retaining their own individuality. Meanwhile, ‘All I Wanna Do‘ is sexy, dirty and incredibly fun, creating a flirtation between rock sound and electronic bass.

The penultimate track, ‘Back To Before‘ has the highest dance-bass concentration leading us to the finale that is ‘Party Instructions‘. This one entertains with Stephen Hawking-style vocals explaining how to “party like a rock star” – who better to educate than Tommy Lee?

Following the contributions for this album, thepublicrecord.com has since promoted public collaborations for at least another 10 artists including Rob Zombie and Deadmau5. Could this be the future of music?!