After touring hard following the release of their first album, three-piece Brummie band Mexicolas have released another round of above average indie rock. Looking at their history it is clear that Mexicolas is a growing beast. Having been formed in 2006 by Jamie Evans, they first appeared to the general public in a Channel 4 documentary called ‘4-Play‘ and since then their brand of rockier, grungier or, in other words, superior indie music has proved successful with their first two singles ‘Shame‘ and ‘Come Clean‘ spreading in the subconsciousness of popular culture through their appearance in several films, adverts and games. 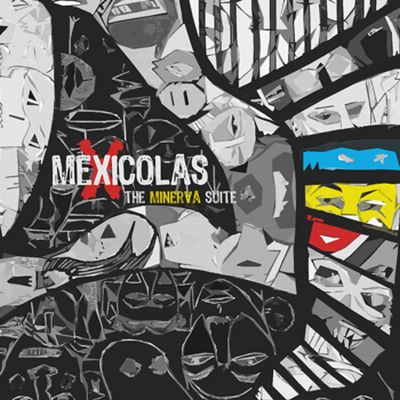 Their impressive debut album ‘X‘, which was made with the help of Lostprophets producer Dan Sprigg, paved the way for their appearance at Give it A Name, Download and Rockness festivals. But, with all that said, is ‘The Minerva Suite‘ good enough to be named after the Greek Goddess and inventor of music?

The album does get off to a great start with three very solid hard rock songs ‘Lullaby‘, ‘Bright Sparks‘ and ‘Take Off‘. The former tracks are enjoyable, hopeful songs that sound like the rockier cousins of Feeder. The repeatedly rising sound in ‘Take Off‘, the optimistic tone and the flying metaphor complement each other and make it one of the better songs on the album.

The next three songs – ‘Logic‘, ‘Brightest Diamond‘ and ‘Closer‘ are quite unremarkable, though ‘Brightest Diamond‘ does have an excellent and wholly uplifting chorus while follow up ‘Closer‘ showcases flashes of brilliance in places but is let down by long stretches of mediocrity. Following that short burst of disappointment, ‘Haphazardly‘ at first seems like a welcome shaking up of proceedings but in fact turns out to be a decent but not too distinct addition to the album.

The songs ‘Halo‘ and ‘Brakes‘ contrast strongly with the album’s first two songs, not in terms of quality but by displaying Mexicola’s credible hard rock influences and also their ability to diversify musically. ‘Brakes‘ is a prime example of this as it contains downbeat, progressive elements that will hook in fans of sadly missed Brit-rock champs the likes of Reuben and  Cooper Temple Clause.

Despite its namesake the song ‘Fred Astaire‘ is not going to remind many people of the man’s classic ‘Puttin’ On The Ritz’. Starting off as a sombre-sounding and steady tune, it roars to life close to the three-minute mark with thirty seconds of heavy-hitting rock to wake up anyone who’d fallen sleep in the first few minutes. The album then moves closer to the credible indie style that started the album and ends pleasantly with the upbeat powerhouse ‘A Room With A View‘ which is our standout of the album.

All in all, the album does much the same as their first; while ‘The Minerva Suite‘ won’t set the mainstream charts alight thus leading a much-needed resurgence of UK alternative rock, it certainly will push the Mexicolas and their great alt-indie rock output closer towards their inevitable widespread popularity and more than a few stadium shows.