Mother Mother originates from Canada and began as a trio of folk musicians originally named ‘Mother’. After adding drummer Kenton Loewen and bassist Jeremy Page before their first major release in 2007, Mother Mother created themselves into the indie rock mould we bear witness to today. ‘Eureka’ is their third studio album, utilising Molly Guldemond’s and Jasmin Parkin’s vocals and keyboard work in a feel-good, ready-for-the-summer mood, with lead singer Ryan Guldemond’s guitar work making sure they just manage to avoid a total collision with flat-out pop music, important given an album cover which screams “sedate me!” 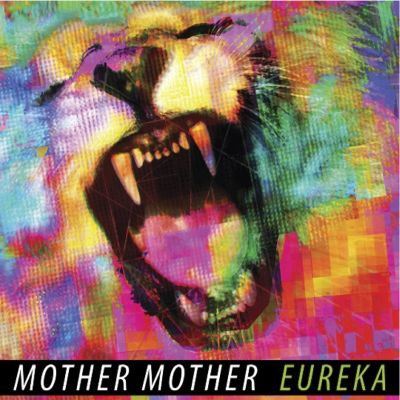 As soon as the first track ‘Chasing It Down’ begins, the listener is introduced to a few seconds of seemingly unrelated samples, then an instantly likeable opening of catchy chords as the band begin drifting through rock, folk and pop. With the trio’s high pitched voices, a rather haunting and melodic sound is produced at times, giving the first few tracks on the album a rather promising vibe, almost as though Luscious Jackson and Mansun were forced to have children, then leaving The Scissor Sisters to raise said offspring through the 00‘s. Sadly, this fresh and relatively exciting opening is soon dampened by the band’s incessant desire to either spring us with the same trap or throw something a little too different into the mix, failing to nail it just in the middle. This results in a downfall from here on in. Whilst the album never even remotely reaches the ‘awful’ category, it genuinely struggles to break out of the world of mediocrity.

Whilst the album continues weaving between genres, certain tracks do little to stand out. An element of electronica is evident in the track ‘Original Spin’ which draws similarities to names like LCD Soundsystem but never quite having the same polish. ‘Born In A Flash’ sets a much slower, darker tone than the rest of the album, which is almost reminiscent of AC/DC or Queen: gradual and harmonious build up as a song’s opening moves into something particularly epic to the ears. However such comparisons with those highly respected names lasts only moments.

‘Getaway’ is possibly the track in which the group sound more at home than any other, playing more with a peaceful folk melody which the original three members are clearly more accustomed to; albeit with vocals that sound slightly comedic due to an astonishingly squeaky pitch. For those more vocal music shoppers, tracks such as ‘The Stand’ and ‘Far In Time’ offer plenty of catchy sing-along moments.

On the whole, the album cannot be described as bad. The lyrics maybe fairly shallow but the sound is tight, and the band clearly all has the same intentions for their collective vision. It just feels that there are several bands already using this formula to far greater effect, and as such I’d recommend bands like Subtle if you want to hear rock/pop cross-genre music executed expertly. With the Summer months approaching, with the increasing need for ease and fun, ‘Eureka’ may find a welcome home for many. But, for the rest of us it feels more like joy-riding through the 90’s, with its ‘poppy’ feel and good nature entertaining for a while before suddenly arriving to a halt and making you realise nothing has been gained… except mild nausea.