My Passion have many friends, but they also have some enemies. Their new album has been met with hatred and adoration in equal measure. Opinion is divided as to whether they are one-hit electro-pop wonders or the new breed of British Alternative. 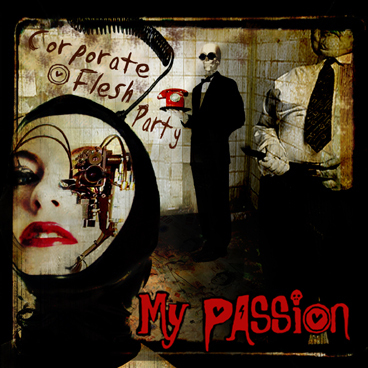 We believe that these four pretty boys who care just as much about their image as they do about their sound have come up with a very decent album in ‘Corporate Flesh Party’ and they deserve all the attention that they are receiving right now. Their sound is something along the lines of The Used-meets-Kill Hannah. Electronic flashes blend with a hard rock sensibility and effortless melody on ‘Crazy & Me’ whilst ‘Play Dirty’ is a chaotic mix of glitchy electronics and Glassjaw-styled hardcore elements. It starts really slow but builds and builds into something grand.

‘Day Of The Bees’ is a definite highlight with a wash of synths cascading over bombastic glam-guitar rthymes and some powerful backing beats. ‘Never Everland’ is a glistening Industrial-pop opera and it’s one of our favourites, as it blends furious rock instrumentation with an unrelenting EBM-styled electronics. ‘Winter For Lovers’ by contrast is a five-minute epic that mixes in a variety of styles and genres. Still, for the most part it comes across as a little weak in contrast to the ferocious tracks that came before. Fortunately the pace picks up for the defiant and punky anthem ‘Hot In The Dollshouse’ with its spacey-synths, tribal drumming and danceable chorus. This is most certainly going to be a live standout when they break it out at festivals over the summer. ‘After Calais’ is an altogether different beast, at just over two-minutes, it’s a short, sweet pop song that takes influence off of everything from Shiny Toy Guns to Portishead.

‘Thanks For Nothing’ is the band’s anti-industry anthem, and it goes down a treat live. Enchanting synth elements clash violently with classic guitars and rock hard drums for a true moshtastic track and the highlight of the album. ‘The Plastic Flesh Disco’ is a confident statement of intent from this band as they bulldoze the senses with blistering beats, muddy synths and metallic guitars. This is surprisingly intense and whether you like it or not it will stay in your memory for some time and make you want to apply glitter to your unmentionables…maybe.

‘Plastic Flesh Garden’ is another varied tune that takes its ques from alt-rock and Industrial. Its fast pace leaves the listener’s head bobbing and arms flailing. It’s neat, accessible and certainly not everyone’s cup of tea but if you like rock with a pop sheen you could do a lot worse. This one finds itself somewhere between LostProphets and MSI. The final track on this offering is ‘Vultures Are People Too’ and it’s a fine one that makes a final point about the state of the music industry, the band’s opinion of it and their place within popular culture…they don’t really care, because they did it all themselves.

Whatever you want to say about their appearance or ideas, musically this band are tight-as-hell and they make determined electro-pop that will no doubt appeal to loads of make-up wearing emo kids, and probably a bunch of you too, don’t be afraid, it really is okay to like this. It’s pretty darn good.

For fans of: Kill Hannah, Shiny Toy Guns, The Used

For more information visit the band’s Myspace. Check out our interview here.