Boom! A new My Ruin album! That’s the short version. We should elaborate on that, though. If you’ve been living on top of a pole somewhere wearing earplugs, or perhaps in a cave in North Korea, you may not have heard of My Ruin. It’s your loss. It’s not like they’ve not been around long enough. 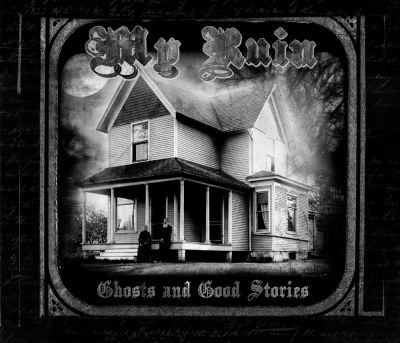 Fronted by Tairrie B, and backed up by her husband Mick Murphy on guitars and drums, it seems that the pair have now dispensed with their bassist. We guess the new arrangement saves a few quid on hotel rooms while on tour. We are always a little wary of bands with fewer members than instruments. It often makes for over-produced albums and disappointing gigs – in this context it is not something that will put any die-hard fans off. Anyway, let’s get on with the album.

The album’s opening track – ‘Diggin’ For Ghosts’ – isn’t the all-out assault on the ears that we expected. We all know that My Ruin can do that; so instead they elect to kick things off with something a little more restrained and…grindy. Yeah, we’re gonna go with… “grindy”.

All bets are off for follow-up ‘Long Dark Night’ though. The metal has really started, and we’re on a loud, pounding, screaming journey that whisks us through tracks two to six inclusive. Tairrie’s vocals pack an enormous punch, and she leaves most growling, shouting male metal vocalists in the dust. The guitars are there and the production is good. We’re not willing to pause the CD for long enough to single out tracks or go into details though, because that would just be wrong. Suffice to say that, if you bought this CD with the express purpose of settling a score with a flatmate or neighbour who has no taste and plays their music too loud, then this is the part of the album that you’ll be focusing on.

‘La Cuidad’ is the first track to slow things down to any noticeable degree. It’s more guitar-dominated than vocally led, and features a lot of clever riffs and solos. Following it, ‘Suicide Tuesday’ is a little purer and crisper than earlier tracks. It’s more retro in feel and structure, which is probably why we like it so much, we dig the phrase “Suicide Tuesday” too, although its use is a little forced here.

Nearing the end of the album ‘Saviourself’ is probably our least favourite track, as the lyrics are a little clichéd and somewhat facile, and the lack of raw riffage and un-relenting serves to highlight the issue. Things get back to normal by ‘Malediction’ though. And when we say “normal”, we obviously mean “enormously loud metal”.

Meanwhile, ‘Turned Out’ is one of those traditionally dark My Ruin tracks that involves a lot of spoken-word before kicking into traditional power-vocal chorus lines. Wrapping up the album is ‘Deathknell’ – the most subdued track on the album. We really like it’s rolling, twisting guitars, spoken lyrics, and even the somewhat cheesy interspersed bell tolls…yeah, we love those.

There we told you right up-front…Boom! With just enough tracks dropping the volume down a smidgen so that your head stops spinning, this is a real powerhouse of an album. It’s not fast metal, but it packs a lot of power both vocally and musically, which is what My Ruin has always done well.