CD Review: Obsessive Compulsive – ‘Dreams Of Death And The Death Of Dreams’

Home » CD Review: Obsessive Compulsive – ‘Dreams Of Death And The Death Of Dreams’

Looking at Obsessive Compulsive’s MySpace banner photograph, this reviewer can’t help but feel a little disheartened. Judging by first appearances, OC is living somewhere between 1990-1997, complete with two-tone dyed hair, a uniform of piercings and the fact one member looks dangerously close to auditioning for the Misfits. But this is about the music, and not personal presentation, I scold myself. 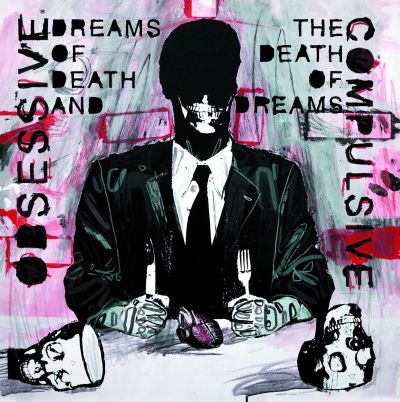 The Mancunian four-piece formed back in 2003, releasing debut 2004 EP ‘A Demon For Every Occasion’ and follow-up ‘The Corpses Of Thought’ in 2007. ‘Dreams Of Death And The Death Of Dreams‘ is their first full-length album, a fusion of their developed style and influences.  Produced by acclaimed producer Russ Russell who notably worked with Napalm Death and Evile, the album is considerably and understandably more polished than their previous output. Fronted by the enigmatic Kelii, Obsessive Compulsive is completed by the interestingly monikered Giz on guitar, bassist Pete and drummer Dani.

Lyrically, musically and aesthetically, OC is steeped in 1990s nostalgia. Vocalist and front woman Kelii has a wonderfully deep, husky voice reminiscent of early Courtney Love, or her 2000s equivalent the Distillers’ Brody Dalle. Their sound is familiar angst-ridden, guitar-driven punk rock complemented by Kelii’s dirty, gutteral growls and creamy crooning. The music and composition is not particularly complex, nor are the lyrics attempting to win any awards for depth, but OC is happily settled in their niche and their dedication to it can’t be questioned. The album is a commendable effort delivered with enthusiasm and proficiency.

The band is driven by a DIY punk philosophy, releasing ‘Dreams Of Death…’ on their own label Vociferous Records in order to retain creative control. This is apparent throughout the album, a sense of stylistic continuity exists in slower, grungier numbers like ‘Hell Is A Circle’ as well as faster-paced thrashy current single ‘Spit The Medicine’. ‘Dreams Of Death…‘ is an accessible and catchy derivation of punk rock, mixing driving guitar riffs, pulsing baselines and tight, skilful drumming with ease. Their refusal to relinquish control of their musical and direction may be creditable, but it may limit them by chaining them to their influences.

A“force-fed, homogenised, radio-friendly rock diet pushed onto teenagers by big money music corporations” is what OC claim to rail against, but this reviewer isn’t entirely convinced this is the album to propel them to the status when they will be able to achieve just this. Their talent is bogged down by their commitment to a slightly outdated style of music, and without development beyond these restrictions, OC risk being pigeon-holed as an awesome tribute to Hole.

‘Keep your dirty hands off our dreams’ rasps Kelii in ‘$$’, echoing like an omen. ‘Dreams Of Death…’ demonstrates that OC truly have the potential to develop into more of a band in their own right, and until then, their collective dreams will remain unsullied.