“Let’s get vaporized, let’s get destroyed, gonna light up the skies” slurs iconically oleaginous OFF! frontman Keith Morris. He turned 56 in last September, and his band has just created a 16-minute, 16-song incendiary odyssey of jubilant hedonism and destruction (self and otherwise). Traditionally this sort of thing doesn’t work out, as anybody who recalls U2’s horrifyingly unctuous ‘Get On Your Boots’ will gladly attest. Gladly, OFF! have pulled it off. 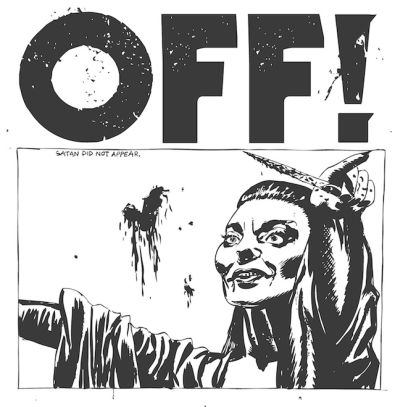 Their new, eponymous album feels organic and true to the illustrious pasts of the four hardcore punk titans of which the band is comprised. If OFF! had in any way attempted to imitate or replicate the style of more recent acts this album would almost certainly have been an embarrassment and a disaster. Upon listening to the album it becomes starkly clear that no such mistake has been made. Opening track ‘Wiped Out!’ starts up with a furious statement of intent, all visceral guitar, driving bass and precision drumming that will instantly transport you to 1980’s underground USA.

Simple melodies and visceral, strained vocals typify the songs that follow, all of which are delivered at breakneck speed. This is the sound of fury, of panic and of ecstasy, perversely combined in one concentrated barrage. The straightforward punk thrash of ‘Borrow And Bomb’ is the sound of reckless destruction, album highlight ‘Vaporised’ is a euphoric and hedonistic call to arms (LMFAO take note – this is what a party rock anthem should sound like), whilst the unhinged drama of ‘Cracked’ offers an anguished snapshot of drug-induced paranoia. If this album be the soundtrack to the night before, it most certainly also speaks volumes of the morning after.

Other highlights of this largely excellent album include ‘Harbor Freeway Blues’ – the whirling, tremolo-picked virtuosity and chugging guitars will have fans of Foo Fighters’ ‘White Limo’ foaming at the mouth, and the gleeful homage to hand-to-mouth vice-embracing living, ‘I Need One (I Want One)’ which closes out the album with a gloriously depraved howl of “Yeah” from frontman Morris which will invariably make you break things. Whether those things be defenceless objects which are close at hand or indeed the hearts of your fellow revellers through your wild dancefloor prowess, is difficult to predict.

There is a great deal to love about this album. It is impassioned, emotive, extremely fun and musically flawless. It is however, occasionally a little samey. Songs like ‘King Kong Brigade’, ‘503’ and ‘Zero For Conduct’ sound great when listened to in isolation, but in the context of the album they drift by uninteresting and unnoticed. The directness and minimalism of OFF!’s sound are huge and essential assets, but they come at a price in that some of their more experimental moments are bereft of the momentum and charm which is so central to their appeal, as can be heard in the slightly muddled ‘Elimination’. That isn’t to say that their attempts to mix things up a little never work out – the lower tempo and near-crooned vocals of ‘Man From Nowhere’ and the eerily dissonant breakdown in ‘Jet Black Girls’ are compelling highlights.

A few more moments of light and shade, of variety and nuance and OFF! would be a truly great album. Nonetheless it is definitely a very good album. It is age-defyingly energetic, frenetically powerful and utterly true to its genre. Just make sure there’s nothing fragile or valuable in your vicinity when you first listen to it – it probably won’t survive the 16 minutes of ferocity you’re about to unleash.