Leeds-based electronic collective, Officers, have pricked a lot of interest of late (unusually for electronic avante garde, they feature a twin guitar duo, but sans bass player). Live shows have been overwhelmingly positively received and have won them the support of influential industry insiders. 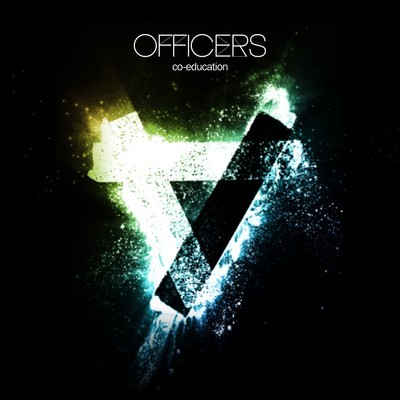 This is an act that is clearly happy straying away from the norm and yet there is an undeniable commercial accessibility to the four cuts on this, their latest EP. Title track, ‘Co-Education’, is the platter’s flagship moment. A pulsing, slithering stomp, anchored by a swaggering, almost 70s-glam, sing-along chorus, Marc Bolan might’ve sounded like this if he’d ever had the chance to meet Depeche Mode. There are, unsurprisingly, industrial overtones but any potential derivation is killed stone-dead by Matt Southall’s vocals. Ballsy, testosterone-soaked and several universes from the effete musical androgyny of the aforementioned Bolan, this’ll put chest hair on your Korg. And stubble on your Moog.

‘The Competition Winner’ is an altogether different beast. Elegiac, mournful and menacing in tone, its sombre moodiness is off-set by a ferocious rhythmic assault that propels the song along relentlessly and ensures Officers retain one foot in the world of rock. Indie-land is a destination they’ve certainly passed through, but one in which they’ve, fortunately, declined to reside.

So far, almost too good to be true so, right on cue, a disappointment arrives. With the limitations imposed by the EP (and time being very much at a premium), any band would clearly want to showcase their best efforts to maximum effect, right? After all, if your act can pen material that genuinely offers something new to several genres and yet skilfully avoids slumping into a generic morass, you’d want the world to hear it, yeah? Oh very dear…

It’s not that their cover of Frankie Goes To Hollywood’s ‘The Power Of Love’ is bad, in fact it’s actually quite good and lends the song a dark gravitas that the original lacked, it’s just that it’s..well, a cover. Why on earth this was included is something only they know. We can, at least, offer thanks they gave Erasure a miss…

Closing things off with a remix of old track ‘Afraid Of Love’ (by Electric Loop Orchestra, AKA Tim Holmes of Death In Vegas), featuring a ridiculously simple but grin-inducing riff, Southall, by now established as something of a versatile vocal chameleon, gives a performance that will have Marilyn Manson awarding reluctant and envy-laden approval; trance-like, compelling and irresistibly danceable, it’s a stylish sign-off that heralds the official arrival of an exciting new act.

The debut album lands in October and we’re waiting. In the meantime this does the job in highly satisfactory fashion.