One of the year’s more eagerly anticipated debut releases, ‘On The Twelve Thrones’ arrives promising much. The release of Officers’ most recent EP ‘Co-Education’, gave notice that electronica had some new pretenders to its digital throne. The four cuts on that platter were a satisfying kaleidoscope of post-industrial, retro-futurist soundscapes, generously shot through with a ballsy rock swagger and an individuality all of their own, that marked the band out from its peers in no uncertain terms. And so with the eleven tracks comprising the Leeds-based quartet’s first album, let us cut right to the heart of the matter and say that they’ve delivered in spades. And then a bit more. This is sophisticated, polished and idiosyncratic stuff that succeeds in bringing something new to several genres, at the crossroads of which Officers sit fashioning their dark trade. 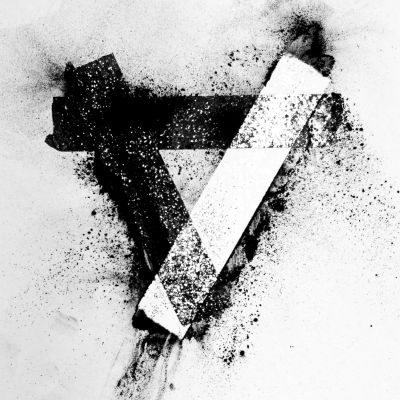 Observing this record’s accompanying press release and the description: “Developed, recorded and produced in the band’s hometown of Leeds”, alongside, “tackles man’s constant battle against the machine; of religion, of government, of digital”, one could be forgiven for getting all post-modern and musing that current rampant consumerism and the growing alienation of humankind from a society, whose technological advances both stifle and enhance the creative spirit, are the themes addressed here. That’d be both presumptuous and, probably, pretentious, though.

They know what they’re doing, we don’t need to and a large part of the album’s charms is the ambiguity and metaphor-shrouded mystique in which they wrap their manifesto. Whatever you think it is, it’s probably not. If you have a copy of ‘Co-Education’, you’ll notice that three of its tracks make reappearance here. ‘Afraid Of Love’, ‘Co-Education’ and ‘The Competition Winner’. They fit seamlessly alongside the other eight songs and justify their inclusion by virtue of excellence alone.

Other highlights included ‘Disarm’, an ominous slice of digital symphonia that subtly invokes, probably unconsciously, the spirit of new romantic pioneers, Vision, and their ground-breaking cult classic, ‘Lucifer’s Friend’. For those of you who strutted your stuff in the day-glo early eighties and retain a penchant for burgundy box jackets, mascara and leather neck-ties, ‘Disarm’ will undoubtedly strike a chord. Similarly, the new generation nourished on hardcore industrial, will feel equally well served. The missing link, perhaps, between Depeche Mode and early Nine Inch Nails? Appropriate, then, that “final mix touches” were added by Depeche Mode’s Dave Bascombe, along with contributions from Death In Vegas kingpin, Tim Holmes.

‘Good Day (To Die)’, while possibly an accurate enough observation, would be a tragic waste if it meant the song wasn’t listened to prior to one’s demise. Its creepy, almost malevolent magic, deserving of repeated plays and a substantial investment of the listener’s time. We could go on; ‘Another Long Year’, ‘Soul Saviour’, ‘(Mutations)’ and ‘Say It Again’ are all finely-crafted slivers of some of the most compelling and emotive electronic music you’re likely to hear all year.

A fine achievement, then, and a serious contender for anyone’s album of the year. Brilliant.