Crossover act One Minute Silence are back and still very very angry, with a new EP ‘Fragmented Armageddon’ to be released on June 17 as something of a taster for things to come, as we wait for their first new album release in 10 years. 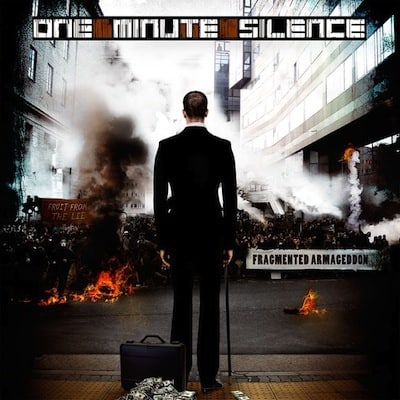 The EP is split into three new tracks, two remixes and an acoustic track. First up is ‘Fruit From The Lie’ which opens things up quietly, with vocalist Yap repeating the typically, politically-tinged lyrics over the guitars and a layer of ambience, until things rise into a chaotic guitar led chorus that’s reminiscent of the likes of Earthtone9 and OMS’s earlier work on ‘Buy Now…Saved Later’.

From there on nothing really changes until things die down and the opening noise of ‘Pandemic Schizophrenia’ kicks in. The track itself properly takes off when things speed up about a minute in. The vocals take centre stage here, with the heavily effected repetition of the songs title forming the basis of the chorus. Things calm down again, and it’s here that this comeback starts to feel alive. First we’re in the realm of noise, circling sounds and soft whispers of sampled female vocals, but then the clarion call comes in the form of a warning that we can “expect more pandemonium, global meltdown, more lies and more war” promptly followed by storming drums, guitars and Yap’s trademark vocals rising above the chaos of the music.

After ‘Fruit From The Lie’ you could be forgiven for thinking that things haven’t really changed too much, and that perhaps this release would prove to be nothing more than a testing of the waters, but as we get further into the EP, the sound is here, and as ‘You So Much As Move’ starts up, things start to come together beautifully. The track switches from the calm of downtempo verses to choruses topped off with Yap’s simple but telling vocals stating that “I believe in none of the above” and through to a melodic bridge that reminds of Hed PE’s earlier work on ‘Blackout’.

Next up we get a dancefloor remix of ‘Fruit From The Lie’ by Ben Hurd. This track would be another unremarkable Dubstep remix if not for the attention paid to the vocals which in places reminds us of the Coil/Danny Hyde remix of ‘Gave Up’ by Nine Inch Nails, which lends a kind of circuit bent insanity to this otherwise mundane mix.

Next up, the Massimo Fiocco remix of ‘You So Much As Move’, meanwhile starts things with a re-imagined version of the opening guitar line but this time on synth. The percussion builds along with the heavy electro bass line until vocals and a half-step beat comes in, and right here is where this remix excels. The track lends itself to this darker electro sound brilliantly. Keeping a similar structure to the original, the track bounces from downtempo segments filled with atmosphere to striking choruses, heavy on bass and beat, with the vocals remaining the only original part used. It’s dark and heavy – and it just works.

The last track, ‘Early Morning’, is an acoustic number, but with an interesting bit of swing percussion beneath the guitars, vocals and violin. Yap shows here that he’s got much more to offer than just shouting political statements over metal, and isn’t above writing an emotional, thoughtful piece of music that wouldn’t be out of place alongside Snot’s ‘Angel’s Son’. The lyrics come across sincere and personal, and a fine statement to the collective thought of the world as it is today. A perfect closure for the CD.

The sound on offer on ‘Fragmented Armageddon’ is tighter and more polished than the band’s earlier releases, there is an evident growth throughout the EP, and though we’ve heard much of this before, there is just something right about it, something right about the sounds on offer and with the right blends of genre. And with the interesting and wholly relevant recent revelations about governments abusing personal information, and their cloak and dagger approach to data handling, it seems to be the perfect time for this politically charged British rap-metal leviathan to resurface to a world not so different to before – but in need of a guiding light.