Opeth have always been a band with an interesting sound – fusing metal with progressive, jazz and death elements topped off with acoustic sections. ‘Heritage’ is the most recent release in their long history. 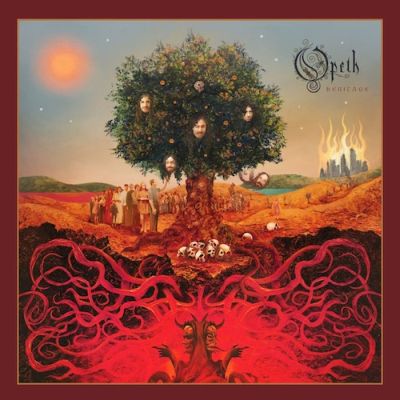 The album opens up with the title track ‘Heritage’, which is built upon a bland piano medley. Fortunately, for the listener ‘The Devil’s Orchard’ adds a more interesting and exciting sound. It’s well composed with some very thrilling guitar sections and keyboard work, though the clean vocals are somewhat off-putting. ‘I Feel The Dark’, meanwhile is a song that seems like it wants to become exhilirating and epic-sounding but lacks the ability to be so. It’s certainly a huge downer for the album. The heavy sections aren’t really that impressive.

The fourth song, ‘Slither’, is basically what you’d get if you mixed Led Zepplin on speed with some flamenco guitar playing. The riffs have a sound similar to that of ‘The Immigrant Song’, which isn’t a bad thing, as it makes the song sound decent; especially with the slight flamenco touch echoing through the riffs towards the end. ‘Nepenthe’ sounds like a dirge, dull and lacking of energy while ‘Famine’ is one of the more exciting pieces on the album, featuring classical elements at the very beginning mixed with some tribal and ethnic sounds following after it. The organs bring about a very jazz-like feel to the song while the guitars seem more funk-influenced.

‘The Lines In My Hand’ tries far too hard to sound fresh, leaving a stale taste. Nearing the end of the album, we are introduced to ‘Folklore’, which could probably be mistaken for a cheap-version of ‘Greensleeves’ [the English folk tune, Nico? Really? – ed] due to some similarities between the two. None on the instruments on this song sound like they should be played together at all. The album finishes with ‘Marrow Of The Earth’ which won’t do much to prevent the listener from pressing stop. The guitars sound as dull as the droning on of a politician.

‘Heritage’ will probably never be considered the best Opeth album though hardcore fans of Opeth will more than likely enjoy it. New listeners will probably be put off by the album; the use of only clean vocals throughout the entire album is a reminder of the band’s 2003 album ‘Damnation’. ‘Heritage’ could easily be considered as musical marmite.