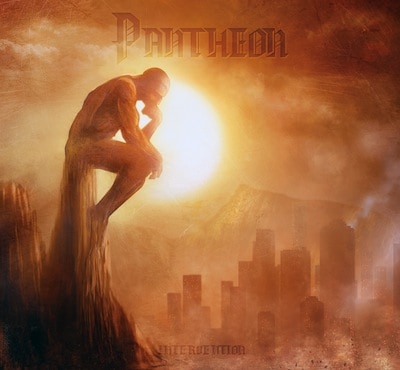 The first single ‘Voice Of Hate’ brilliantly introduces the new sound which may come as a surprise for old fans, as they have evolved from their original all-out thrash route. While covering the same politically-charged themes, they add an intriguing twist on the New Wave Of British Heavy Metal style.

‘Black Gold’ opens with similar riffs to other intense tracks on the disk, although the vocals are noticeably different and on the whole, it makes for a pretty powerful effort. The heaviest and standout recording on this though, is ‘Silent Apocalypse’. Again, we found ourselves collectively appreciating the collective skill and epic riffage; the vocals are prominent again, and this material really serves to take Pantheon’s sound to a whole new level. Nicely done boys, this is a powerful statement of intent showcasing real grit and determination.