A well-established name on the London underground, Partly Faithful – fronted by the ghoulish Ed Banshee [ex-Screaming Banshee Aircrew] – have released a string of intriguing EPs and earned notoriety for their tense live performances. Recorded at Earth Terminal studios alongside producer Lewis Child, ‘Lazarus Under Glass’ is a highly percussive, surprisingly rewarding long-player with left-field melodic twists: the aural equivalent of J.G. Ballard and Bertolt Brecht’s collected works thrown into a blender. This is the first release to feature new guitarist Anouska Haze, who has given the band focus with her expressive playing. 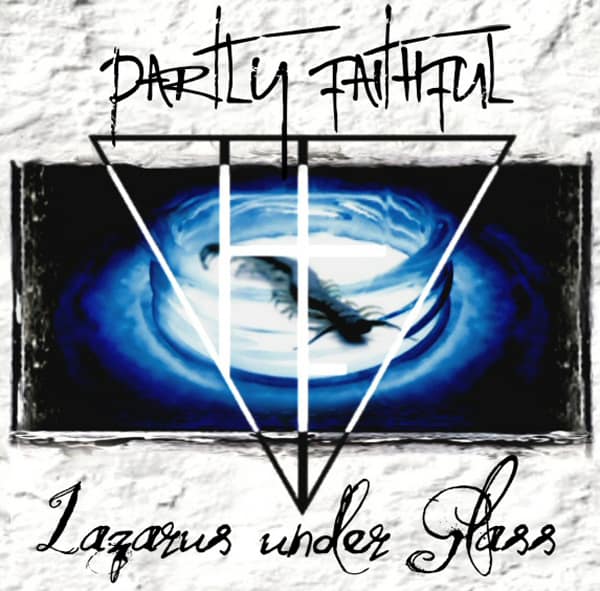 If it is pure nostalgia you’re expecting, look elsewhere – this is a thoroughly modern sounding record, with one foot dangling precariously over the precipice of leather jackets and eyeliner. This is not simply an exercise in arty post-punk, but rather a meeting place for disparate, choice elements of alternative rock. Swathed in effects and reverbed drums wet enough to drown a pet in, ‘Amen’ is pure theatre: following avant-garde scene-setter ‘Lazarus’, Haze’s merging of slide guitar and feedback lend an unsettling near-psychedelic undercurrent, driven by its fuzzed bass lines and colossal percussive flourishes. It would be foolish to dismiss the Bauhaus influence, but singer Ed Banshee manages to forgo the usual Murphy-esque caterwauling in favour something all-together more tasteful, subtle even. Reined in, he possesses a gritty, seductive croon coupling with unexpected vocal harmonies to create a dynamic counterbalance redolent of My Bloody Valentine, shedding light on grinding passages in single ‘Underset’.

If ‘Lazarus Under Glass’ were to have a primary strength, it is in the suffocating to and fro of the rhythm section. Never has a hackneyed phrase like “dystopian groove” been more appropriate than in reference to Christopher Blake’s angular four-string playing on ‘Big Bang Medicine’ – an uneasy marriage of Bolan glamour and early Sex Gang Children, the relentless coda “take your poison” is catchy and frightening enough to force your hand toward the vile. The songs here are remarkably consistent, flowing seamlessly together without bleeding; even requisite slow numbers ‘Wasting Ground’ and ‘Skin’ manage to escape sounding, well, that requisite. Banshee’s lyrics may be a little terse to the bookish alt rock aficionado, but work wonders in the context of the music, capable of some strong turns-of-phrase – “if the devil’s in the detail, then I’ve felt the grind” [from ‘Underset’]. The namesake closer burns the candle at both ends, the male and female vocals slowly converging as the band races toward its conclusion; it is a beautiful, emotive piece – a deliciously left-field way to end a record. If ‘Lazarus Under Glass’ is the soundtrack to our dystopia, then things are not as ugly as Ballard predicted – between the non-placed shopping malls and underpasses lie snapshots of unexpected beauty and colour.