Portion Control’s latest offering is ‘CROP’ and it’s made up of two disks of raw and emotive Industrial work (taken from previous albums ‘Wellcome’, ‘Stansted’, ‘FWG’, ‘Onion Jack IV’ and ‘SLUG’ from 2004-2008). This band has quite obviously influenced the likes of Pitchshifter, Pop Will Eat Itself and Killing Joke. 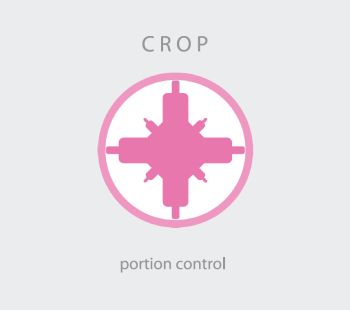 On Disk one’s opener ‘Hardman’ you can see how the band has influenced Depeche Mode. Soulful electro elements pound away at the brain throughout this ambient and exciting offering making the listener beg for more before vitriolic vocals barge in, bringing a punk-infused chaos to the order. Next up, ‘Global’ reminds slightly of Cubanate with added fire and bigger knackers, it’s vast, loud and dark and contains some quality musicianship.

‘Pure Menace’ is a quirky track that strikes slow and sees haunting electronic sounds push up against cold Industrial noise ala’ Aphex Twin. It’s an absolute powerhouse that leads into ‘Blood Rushed To Head’ which amalgamates various influences including trip-hop, electro and EBM. On ‘Blind Eyes’, Dean Piavani’s hard vocals and harsh lyrics smash against clean and clear electronics before ‘Too Much Damage’ hits with some resounding, bleak Industrial rock that will appeal to the disillusioned British public. It’s a spiteful attack that will see many a fist pumping whether it is in the home or at a venue.

Meanwhile, ‘Onion Jack II Segue’ is a 16 minute epic that starts off as an angry punk tune without remorse and soon it builds toward a massive ending compiled with atmospheric electro sounds and accessible chill-out elements. ‘Chew You To Bits (Rebuild)’ incorporates the violent soundscapes of Nine Inch Nails and adds in a clever pinch of Brit-class with the 80’s influenced synths. In contrast, ‘Sickman’ is a brooding, dirty and sample-led beast that doesn’t relent for the entire four minutes; it’s utterly addictive noise.

At nearly 20 minutes, ‘Onion Jack Segue II: Pearly King And Queen Cosh Boy. Onion Freak. Drive By. Sunbeam’ (mouthful?), ends things on a high note with a random but affecting mix of squelchy synths and blistering beats that rival The Prodigy‘s best work. This is the first disk’s standout and it’s a defiant aural assault on the ears.

Disk two starts off at a lightning fast pace with ‘Brain Scraper Death Drive (Rebuild)’ – a poppy, cyberpunk beast with a dancefloor-baiting chorus and winding rock hard electronics before the primal cyber goodness of ‘Defend (NTRSN version)’. For ‘Witness/Transmission Intro_01’, buzzing dark-electro sounds crash within progressive bleeps and a creepy metallic sheen for a quality lead into the final track ‘Amnesia (beta.01)’ which nods toward modern Industrial and has inspired the likes of Combichrist. This is a brutal but brilliant ending.

There are certainly no frills on this fine collection; it’s just pure and powerful electronic music from a group that really knows how it’s done. Whether you are from the old or new-school of Industrial, you need to check out this record.

For fans of: Real f’ing Industrial music, Killing Joke, Pop Will Eat Itself