The Internet has revolutionised music over the last twenty years, how it is sold, distributed and marketed. Yorkshire trio Prowl, however, took it one step further by meeting and forming entirely through the technological wonders of cyberspace. Comprising of bassist and vocalist Benjamin Sherwood, guitarist Jono Sayner and self-taught drummer and female vocalist Lauren ‘Loz’ Goodacre, Prowl carry themselves with the confident swagger of a band formed long before 2008. Labelling themselves as “either alt-rock or new prog, and claiming influence from Porcupine Tree, Pantera and, erm, East 17, the band have gathered much local support within North Yorkshire, releasing debut album ‘Clinical’ recently. 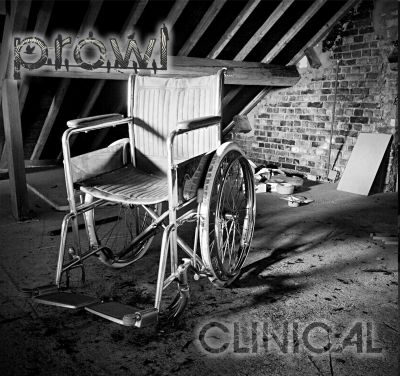 A clear nod to their varied influences, opener ‘Victimless’ is a slightly lacklustre start to proceedings. Sherwood’s vocals echo the instrumental rises and falls in a painting-by-numbers approach so tightly, his voice becomes too closely linked to the musical component of the track, to the great detriment of his vocals.

The haunting ‘Encounters’ is one of the record’s stronger tracks, showcasing the complementary harmonising of Sherwood and Goodacre’s timid vocals over thin layers of moody guitars and tight drum loops. Neither appear fully confident in their singing abilities, and accordingly when softer singing is required, a greater depth of sound and control is achieved. The bitterly ironic ‘A Kinda Love Song’ provides a dose of lyrical humour to the otherwise angsty album, (‘First thing that struck you/Was I just wanna f**k you’) paired with atmospheric, skilled musicianship complete with flamenco touches. Whilst listenable, there is nothing here to make them stand out from the rest of the pretenders to Porcupine Tree’s misery-infused progressive crown.

If Prowl were to step out from the considerable shadow of their influences, they could prove themselves as a sonic force to be reckoned with. Currently, their erratic leaps between wanting to be as atmospheric as A Perfect Circle, or as noisy as Rage Against The Machine creates an uneasy and wearying listening experience. Sherwood’s vocals are better matched to the slower, sentimental tracks such as closing ballad ‘Misplaced’, his voice consistently overwhelmed by the louder stylings of the rockier numbers. Musically, Prowl are technically competent, yet vocally ‘Clinical’ never rises its head above being merely decent.