Pure Reason Revolution provide the kind of music that makes you want to get up and rock out. ‘Hammer And Anvil‘ is their latest full-length offering, and it is this ten track album which should make you, and everyone else take notice of the band in 2011. PRR are most definitely a hidden gem in the sea of alternative bands today. 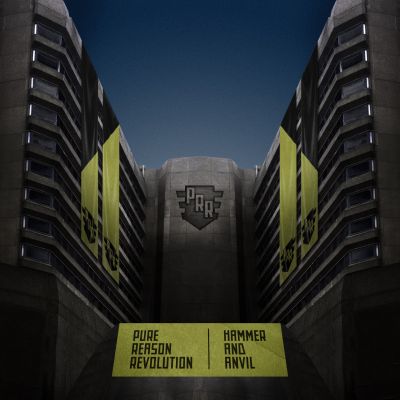 Upon listening it’s clear that Pure Reason Revolution are a band who aren’t about keeping within boundaries and conforming to the mould of most other contemporary musicians. Following the accomplishment of their previous album, 2009’s ‘Amor Vincit Omnia‘, the band successfully chartered a new direction with their music, combining elements of various genres including rock, pop, and electronica, leading to a remarkable fusion blended together in the sound of ‘Hammer And Anvil‘.

With stand-out tracks like ‘Never Divide‘ and ‘Armistice’ they manage to combine the catchiness of MGMT whilst giving an entirely new spin on modern electronic music, seemingly drawing influence from everyone from Nine Inch Nails to Depeche Mode, even managing to echo Gorillaz in parts. Whilst Jon Courtney’s smoother than silk voice takes precedent on the album, lulling you into a sense of security, bassist-vocalist Chloë Alper is not one to take a backseat role. Refreshingly, her interjecting vocals are not the simpering efforts of a mere backing singer but a force themselves to be reckoned with, evident in the turbulent ‘Fight Fire‘. The two harmonise in perfect sync, poles apart in sound yet complimenting one another faultlessly.

‘Hammer And Anvil‘ is one of those albums you could share amongst your friends and everyone would find something they appreciate. With epic choruses, soaring guitars and unrelenting electronic beats, this album excels in being both sophisticated as well as hard-hitting, equally comfortable being played on the radio as it will be to reverberating throughout colossal arenas.