2010’s ‘Open The Sky’ marked a quantum leap forward in terms of sound and song craft, so dramatic a leap in fact, that I could see Rhombus hurtling headlong up a stylistic cul de sac. With studio supremo Stephen Carey [Adoration; Eden House] locked in at the controls, the sophomore effort was a real game-changer: a “worth-seeing” live act suddenly became serious contenders in the Brit-Goth underground, silencing naysayers – this writer included – and earning new fans. 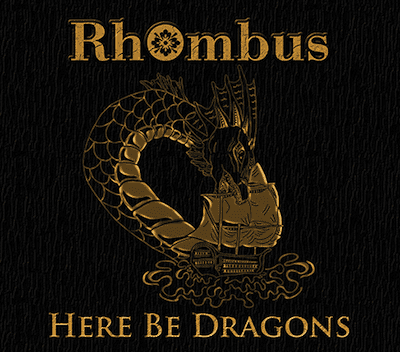 So, ‘Here Be Dragons’, the “forever-delayed” follow-up. Social media may get on our collective wicks at times, but it’s been undeniably pivotal in the continuation of independent music. PledgeMusic has become a veritable feast of fancy for band fund-raising and audience interaction – an opportunity for fans to get involved, buy limited-edition merchandise and even sundries such as “things the band don’t want”.

Straightaway, the classic Rhombus elements are in place – the big choruses, the split-octave vocals, and the wash of elation when those guitars hit. Carey’s absence is instantly noticeable with the production being something of a retrograde step, but thankfully the instruments never quite manage to swamp one another. They are clearing brimming with confidence on the back of ‘Open The Sky’, and the quality of the song writing is astonishing. The sumptuous title track defines this record: its blend of major-key refrains and middle-eastern inflection is peerless, with singer Mya’s semi-tonal scat providing counterpoint to Ed Grassby’s [bass; vocals] earnest baritone.

The same can be said for ‘Fallout’ and ‘Tomorrow’s Yesterday’, showcasing the band’s sonic intricacies with myriad dynamic shifts and key changes. While the use of piano and strings is nothing new to Rhombus, the instruments are more creatively deployed, forging their own harmonic lines rather than simply propping up the mix. Even at their least imaginative, they remain impeccable tune-smiths – I challenge you not to find yourself nodding along to the sub-Die Laughing groove of ‘Turn Around’, with the duelling guitars of Ian Grinn and Rob Walker sparring back and forth across your headphones.

Only briefly does the band lose way: ‘The One Thing’ and ‘Lifeline’ feel somewhat hurried for lack of better arrangement, with the latter feeling particularly sterile – they are not bad songs, per se, rather surrounded by superior company – and If I were to get all curmudgeonly about it, I would say that call-to-arms ‘Timeless & Elegant’ lacks the panache of the ‘Anywhere’ EP version. These are small gripes however, because overall ‘Here Be Dragons’ is a worthy follow-up with every kind of song one could ask for, Goth or otherwise. Rhombus have always known what they’re good at, but they continue to prove that the formula can be contorted into new shapes. Playful as they are sombre – with tongues hovering precariously around cheeks – they are simply a darned fine rock ‘n’ roll band with a penchant for “changing the light bulb” [Wikihow: Goth dance].