CD Review: Serpico – ‘We Can Rebuild’

We Can Rebuild’ is the latest EP from London based and incredibly good-looking rockers Serpico. A few things to note: they have great hair and great music, the only issue is that this may one day become their curse as they drown in a torrent of teenage fans. Despite their big sound, they don’t take it over the top, they’re making music as it should be; catchy, impressive and with a hell of a lot class. ‘No Time For Heroes’ starts us off with memorable lyrics and shouts that will no doubt be sung by an audience at every gig it plays. 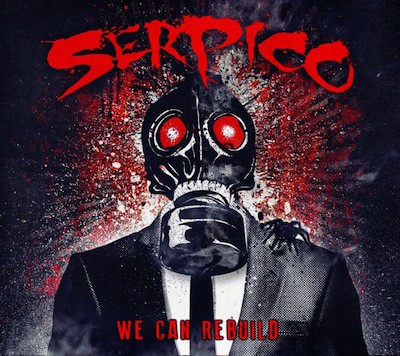 ‘Nothing Left’ heads into pop-punk territory, with catchy shouts of “Hey, Hey, there’s nothing left to live for!” drilling the song deep into your head to be sung while you’re doing something mundane hours later. The song is filled with crazy-talented guitar solos and screaming that keeps it all interesting and listenable; you will not be bored for one second. The entirety of their music gives the impression that its main appeal is in the live performance, having an energy that can’t be contained in the confines of your speakers. ‘Screamager’ (the ace Therapy? cover) has all the angst and deep tones of a punk song, with the guest vocals of Alex Davies (of Elliot Minor fame) adding to their already impressive palette of voices. Nearly every song has a killer guitar solo, which by no means is a bad thing, but may get a bit repetitive for some.

‘What Have I Become’ is reminiscent of American punk, a song that nods at the likes of Anti-Flag and Billy Talent, with a darker tone and riffs laced through thoughtful lyrics. The song is slightly downplayed by a moment of cheesy auto-tune towards the end, but luckily it doesn’t last long enough to ruin it. Lead Singer Mikey has lungs that transcend the need for cliché effects, which is noticeable in each song that he belts out; in future we say, no effects just raw power, please. ‘We Can Rebuild’ is an epic finale, an energetic finish with the most mosh-pit friendly solo we’ve heard in a while. This is a song that will leave you bruised. Serpico are listenable and impressive, with an EP that would feel right at home on radios and speakers everywhere. Drink some tea and raise your fist; British punk is alive and well.