Ragga-punk heroes Skindred return with fourth eagerly anticipated album ‘Union Black’, an aural celebration of Britain’s multicultural residents. The record is singer Benji Webbe’s love letter to honouring cultural and musical combinations. Even the cover art of a roaring lion serves a dual purpose, handily an emblem of both Britain and the Rastifari movement. 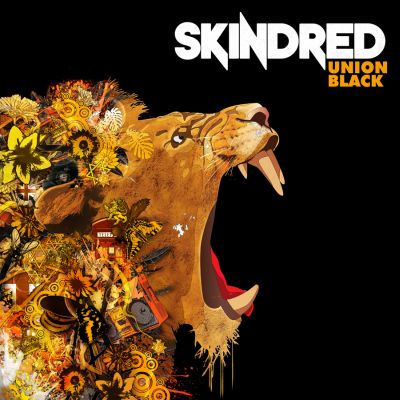 The most notable aspect of ‘Union Black’ is Skindred’s incorporation of electronica and drum ‘n’ bass (originally pioneered in metal circles by Pendulum and Chase and Status). Whilst this could be observed as an attempt to jump on the contemporary popular bandwagon, remixing and introducing metal fans to differing genres has been the band’s trademark since their debut effort in 2000. First single ‘Warning’ features Jacoby Shaddix of Papa Roach; the impassioned vocals of whom are able to hold their own against Benji’s in a sonic assault of raging nu-metal climaxes and hardcore baselines. Energetic and brooding, ‘Warning’ is a strong representation of the record as a whole, treading a thin line between optimism and anger, love and hate.

‘Cut Dem’ foregrounds electronic breakdowns and dubstep loops over crunching guitars pierced by Benji’s trademark soaring vocals. His rich Rasta tonality undercut by dancehall beats creates a sound both grounded in heritage and undeniably modern. The classic Skindred formula of heaviness highlighted with reggae overtones is at its most apparent in ‘Doom Riff’. The Caribbean-inspired drumming and call and response vocals are summarised by Benji’s assertion: “Don’t care about your creed/your sex or your race/you can turn on the lights but there’s no way we’re leaving.”

‘Living A Lie’s soothing electronic intro gives way to unmistakably UK-style rapping, ploughing into a powerfully poppy chorus. Yet the result is authentic and not contrived, Webbe and company skilfully combine the most complementary elements of their preferred genres in a manner worthy of praise not derision. The menacing ‘Own Ya’ exhibits the vocalist at his most confrontational, all roaring vocals and growling basslines.

Stand out track ‘Gun Talk’ meanwhile, layers retro vinyl crackles with pounding drum ‘n’ bass breakdowns, the summery vibes segueing effortlessly into electro flourishes. Far from the superficial Rasta posturing of Rihanna, the track is a full-blooded and convincing slice of Caribbean sunshine for the gloomy streets of urban Britain. This release marks the point where Skindred stopped plundering metal riffs and flaunting their reggae influences and carved out a unique sound of their own.

For the first time, metal and reggae elements combine with electronica to create a piercingly modern and hearty melodic blend, instead of the uneasy bedfellows of the past. Skindred may have finally produced the record to convert their disbelievers.