It is hard to believe that Snow Patrol have been around for over a decade. Nonetheless, the band have become one of the most popular alternative bands around. 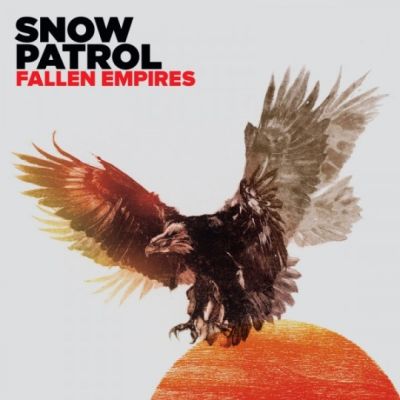 Nominated for several awards and having written chart hits ‘Chasing Cars’ and ‘Run’, the guys’ latest album is one of their most highly anticipated ever. ‘Fallen Empires’ is a deviation from SP’s usual mellow tones, taking a more electro-pop route. This diverse collection of material sees the band draw on not only the aforementioned electronic and pop styles, but on some gospel too. Wait…don’t click off. Don’t…

The opening tune, ‘I’ll Never Let Go’ draws you in with a surprising synth-rhythm and is gradually joined by Gary Lightbody’s calming vocals. It sees some of the band’s most catchy lyrics yet take the fore, ensuring you’ll be singing it for the rest of the day. ‘Called Out In The Dark’ becomes even more electronic still, sounding like a blend of the Killers and Goldfrapp. However, contrary to what you might think, this mixes well with Snow Patrol’s usual tones adding a new dimension. Honestly.

The third track ‘The Weight of Love’ takes on a totally different vibe, creating one of the most infectious pieces on the album. Starting out with a guitar riff it builds to a captivating crescendo of vocals, gospel choir, piano and guitars; think Kasabian-styled festive-indie. The following effort ‘This Isn’t Everything You Are’ takes on another vibe entirely, echoing the sounds of The Script. It is driven by Gary’s vocals and Tom Simpson’s piano building to a possible chart-topping concert anthem. ‘The Garden Rules’, further develops Snow Patrol’s new found piano passion.

The sixth track, also the title track, differs from the rest of the album. Acting as a sort of interlude it combines all the elements of the album, the choral vocals, guitar riffs and synthesizers. Then there is ‘Berlin’, a track that will most likely be a hit on the band’s upcoming tour; it consists simply of one vocal line that is repeated over and over. This is then layered with piano, guitar, strings to create a rather “mystical” song.

We are then presented with ‘Lifening’ and the old-school Snow Patrol returns to mellow us out. Discussing simpler times of living in Ireland this song could possibly be the next ‘Chasing Cars’. The album then seems to shed its electro-pop overcoat, with the tracks ‘New York’ and ‘In the End’ concentrating more on merging the guys’ original sounds with more subtle keyboard rather than the electro storms of previous tracks.

The eleventh song is a world apart from the others on the album. It allows you to appreciate Gary’s vocal ability and demonstrates the power that can be created by the simple layering of guitar, vocals and drum beats. ‘Those Distant Bells’ builds slowly into a powerful yet humble guitar ballad. ‘The Symphony’ brings forth exactly what the title suggests; a symphony of the all the album’s electro sounds. At times it does become quite tumultuous but the overall song is appealing. ‘The President’ is a complete contrast to this, focussing on the classic Snow Patrol sounds, blending piano, vocals and strings. It is a rather nice, but it does sounds like a re-hash of other Patrol material.

The concluding track of ‘Fallen Empires’ is a strange one. ‘Broken Bottles Form a Star’ is a sort of musical interlude, leading on from ‘The President’, but as it comes at the end of the album, it seems like an afterthought and you’re not quite sure how to react to it. In summary then, this sixth album from the Snow Patrol gang really demonstrates their creativity and the fact they are willing to embrace the modern tastes of today’s public.

Songs such as ‘The Weight Of Love’ and ‘Those Distant Bells’ are truly magnificent, probably ensuring more chart success for the group. This sees vocalist Gary Lightbody showcase the full force of his lyrical and vocal ability, however this is overlooked at times in favour of exaggerated choral effects and synthesizers. However, like we said earlier, it’s an interesting direction. Fans of old Snow Patrol might twitch a little, but there is enough here to help them appreciate the band’s development and examination of new styles.