If you’re Arnold Schoneberg or Karl Heinz Stockhasuen, pioneering serialism or pushing dissonance to the outer limits of our understanding of conventional melody and harmonic structure, you might get away with releasing an album like this. Maybe. Just. At a pinch. 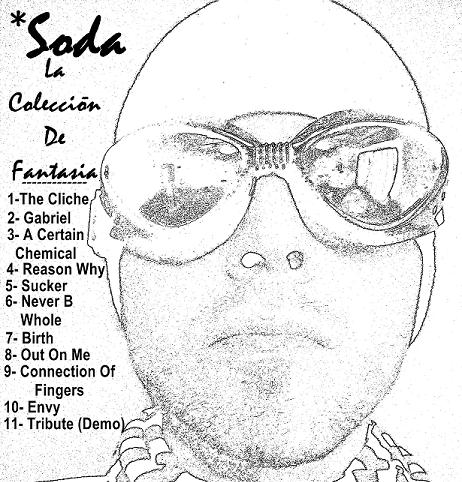 Soda, though, is none of the above. Instead he is a bewildering amalgam of folk, indie, post-grunge and Jesus and Mary Chain-style electronic bleeps, burps and distorted feedback.

What this album is, is a collection, and a very eclectic one at that, of the artist’s personal favourites from an extensive back-catalogue. And that is its very weakness. It’s a risky move as there is a high chance the material will not be given the benefit of the doubt by first-time listeners.

Furthermore, there is some good stuff here but there is also very bad material too. Of the former, ‘Reason Why’ shows song-writing smarts and a vocal line that is perfectly acceptable.

Pleasantly un-demanding, dreamy, almost, in an Incubus-like manner, one can only wonder why he bothered filling the album with material that is significantly sub-standard, by comparison, when material like this is clearly possible. Of the latter category, we would cite ‘Gabriel’ and ‘A Certain Chemical’ as particularly inexcusable offenders. The vocals render these cuts virtually unlistenable. Add to this a wildly varying quality in the production department; in parts all sparkly, modern and glistening, in others, with all the polish and sheen of the proverbial badger’s hind-quarters, and the sum total is confusion.

Confusingly, ‘Never B Whole’ attempts further exploration of the territory visited in ‘Reason Why’ but is weakened, again, by vocals that have only the most casual relationship with the song’s key signature. It’s hard to imagine the artist was happy with the finished take when listening to the play-back.

It’s clear that Soda has ability, and his website offers insight into a bewildering array of projects, spanning just about every musical genre, and that’s the problem, frankly: spread too thin across too many different surfaces, he denies himself the needed time, space and depth to explore and really master his craft. This release, therefore, doesn’t work by virtue, firstly, of the sheer variety of material on offer and secondly, its inconsistent quality.

This guy needs a manager, badly. Someone to take some control and instil some focus. At the moment, he appears a jack of all trades. He needs, instead, to concentrate on becoming a master of one.