Since the reform in 2010, Soundgarden fans worldwide have been chomping at the bit for this moment, one where one of Seattle’s finest, releases their first studio album in over fifteen years. If there was any doubt that they might not live up to the legacy they left behind them then it’s quickly dispelled. 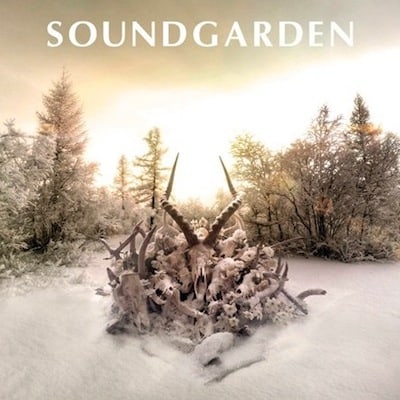 There’s no chasing past glories with this belter; instead Chris Cornell, Kim Thayil, Ben Shepherd and Matt Cameron throw us an offering which reflects a significant growth period and a well honed, trialed and tested musical attitude. Of course, it wouldn’t be Soundgarden unless there were similarities to the best of ‘Superunknown’ and ‘Badmotorfinger’ but the band have used the time wisely to produce an album that is secure in its own skin. It’s an eclectic blend of all the best components: depth and intensity, incredible shredding, highly strung vocals, intricate time signatures and a sturdy yet creative rhythm section.

The band commentary ‘Been Away Too Long’ is both solid and heavy. We could argue it’s a tad over-polished but it holds all the key ingredients to scene set for the rest of the album: brawny beat-it-out percussion, trademark Cornell vocal hooks and Thayil’s riff-tastic ruminations to set the tempo.

‘Non-State Actor’ and ‘By Crooked Steps’ hold up the front with attitude and a heaviness to compliment what follows. Reminiscent of that back of the van, fuzzy, dirty grunge scene of old whilst somehow making it new, the mixed up time signatures and the guitar God-manship that we’re used to attributing to Thayil, ‘Non-State Actor’ proves that he was born to riff.

‘A Thousand Days Before’ feels a little slow until you realize that the beauty is always in the journey. The destination is the euphoric release of the epic chorus at the three minute mark.  Twenty years in the making and Cornell has perfected that heart-breaking wail.

‘Blood On The Valley Floor’ brings down the tempo to a slow riding groove which is complemented by distortion which is almost as disturbing as it is uplifting.  It’s sludgy in all the right kinds of ways. A reflection on the mortality of man and the loss of innocence ‘Bones Of Birds’ is the track you know will stand the test of time, Chris Cornell is on fine form and his strength of delivery and lyricalism in this track alone holds him high as a frontman for this century. Another mid-tempo track, ‘Taree’ might not have the same all-eclipsing feel as ‘Bones…’, however, pro-points have to be issued to Matt Cameron as he switches up with ease from the back-of-stage grooves to the up front, punchier sounds.

‘Attrition’ is the ‘lift” song for the album, full-pelt punk with a bite to go the distance. Mostly it serves to highlight the standout track ‘Black Saturday’ which cinematically follows with its interesting floaty acoustic and hauntingly doomy lyrics “…kill me right away if I start to get slow”.

The album closes a little unexpectedly on a part bluesy, Tom Waits inspired ‘Rowing’.  An experimental try which is both fresh and captivating with Cornell’s falsetto proving that his vocals have stood the test of time as much as the band itself has.

‘King Animal’ is a modern take on the vintage rock album, bursting at the seams with elements of Zeppelin and The Doors yet retains something special in the subtlety of its creative detail.  Showcasing them as artists weaving an intricate picture through hidden horn sections, accentuating rhythms and build-em-up vocals, it’s evident that the energy of their youth prevails – nostalgia can take a backseat to this stomping, twenty-first century Soundgarden sound.