Where do we begin with this band? By nature, Speed Dinosaurs are incredibly confusing. The first thing we struggle with is pinning down what genre they are. Are they punk? Are they folk? Are they (as they call themselves) Dino-Terrorcore? Are they a mental version of Mumford And Sons? 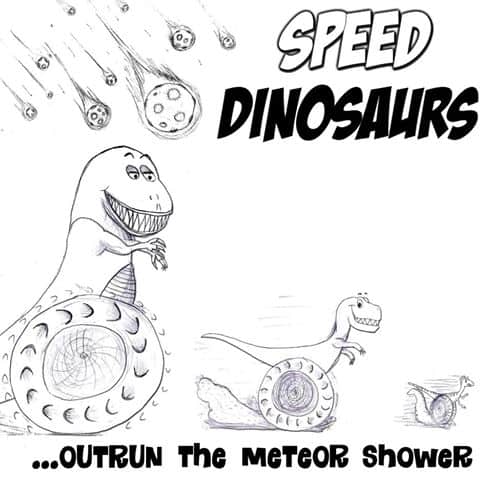 Playing several odd instruments (a double-bass, a ukulele and cajon), Speed Dinosaurs do make it pretty difficult to place exactly what they are about. In their first song, ‘Not That Punk’, they profess how they aren’t punk. What the band has going for them here is a fantastic range of music and perfect harmonies as they all sing together in various parts of the songs. Rather contradictorily, the second song off the album, ‘Freemason’ is fast-paced, and sounds exactly like you’d expect a punk song to sound if played on a double-bass, hand drum and ukulele: both incredibly odd yet incredibly pleasing to the ears. It’s almost punk rock, but at the same time it’s something else entirely.

Hitting the middle of this (unfortunately short) five-song album is definitely the peak. ‘I Wish I Worked Harder At School’ is both insanely catchy and hilarious. With a mix of a catchy, rhythmic chorus, slowed down German (yes, German) lyrics in the verses and even a bit of German-English rapping thrown in there for good measure, it really is both the best and hardest to explain song on the album. This is their “sing-along” song as such, you can definitely see crowds chanting to this, swaying in the lilty, upbeat tune.

‘A Working Hypothesis’ hits us again with ukulele so fast I’m surprised it’s actually possible. It mixes it up again with ska style rhythms, which is probably the album’s weakest song. The acoustic nature of the album means ska music sounds a little bit too cluttered when played on the aforementioned instruments. That is not to say it’s not enjoyable, it’s simply at times the clicking of strings and the cajon merge into a bit of a mess which takes you out the music. The album ends with yet another genre swap. Now we have a reggae song, which is absolutely fantastic when played in this style with these instruments. ‘Got Too Drunk’ is definitely another highlight of the album, really letting the whole thing go out with a bang. A slow, chilled-out bang.

So where to begin? Even after multiple listens the band seems hard to define. Each song is a different genre done in a very unique style. It’s a little bit folk, it’s raw and fast like punk rock, it’s funny, it’s laid back and it’s thoroughly disorganised. One of the things that make Speed Dinosaurs so enjoyable is that they sound real; it’s music that you can tell was made by friends who just wanted to muck about. You can instantly connect to the album, even if it is both odd and questions everything you think you know about music genres. Hopefully Speed Dinosaurs will continue to get bigger and better, letting their weirdness grow and become refined rather than go extinct. There’s enough bands these days who stick to one idea or one genre, and ‘… Outrun The Meteor Shower’ really is an evolution.