Hailing from Vancouver and now located in California, Stayte consist of multi-instrumentalists Josh Bradford (lyrics and vocals) and guitarist, programmer, keyboardist and producer Clayton Worbeck. Like fellow industrial music perfectionists Trent Reznor of Nine Inch Nails, Stayte‘s core members employ a revolving door of live and session guitarists, bassists and drummers, while they retain creative control. Co-founded in 1997, Stayte have been quietly beavering away building a dedicated fanbase whilst operating in the shadow of their more famous side-project The Revolting Cocks. 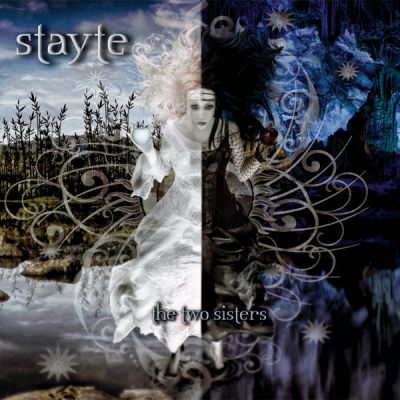 ‘The Two Sisters‘ is an intriguing fusion of old school, straight-up industrial metal and gothic-electronic and synthetic nuances made possible by the development of more sophisticated technology. For example, Mercutio’s Queen Mab speech from ‘Romeo And Juliet‘ on penultimate track ‘Queen Of The Old Ways’ harks back to Industrial’s roots, when literary references were widespread and often acted as lyrical inspiration. ‘iEnemy’ provides a slight dig at religion – “Jesus Christ, your friends were thieves and hookers’ – but the prevailing theme of the album is feminine mysticism and temptation. “Take me to the waters / take me to her eyes / Let her eyes teach me to see” bellows Bradford, sounding convincingly like a young Maynard James Keenan. His distinctive vocals remain on the right side of nasal throughout the record, interweaving with and manipulating the backing samples and refrains culminating in an intensely claustrophobic and addictive atmosphere.

Title track ‘The Two Sisters’ laments as the phrase: “We took the apple from the garden” echoes throughout the recording. The pair is enchanted by the dual good versus evil siren song of the metaphorical females residing at the album’s heart. It is as equally melodically ethereal as it is grounded in hellish metallic crunching chords, a brilliantly executed conceptual exploration of heaven and hell, virtue and sin, honour and temptation. Gathering pace and depth with each listen, this is a wonderfully melancholic yet bitter recording that should propel Stayte to the level of recognition and accolade they truly deserve.

The ‘Two Sisters‘ begs, borrows and steals the best parts of NIN’s opus ‘The Downward Spiral‘ and births it kicking and screaming into the 21st century, an anguished and obsessive delivery. Bradford and Worbeck have produced a rare beast, a stylistically faithful yet innovative album. Jourgensen will be proud boys.