Stone Sour has always been a band to sharply divide opinions. Many may not have heard of them, but will have definitely heard of charismatic vocalist Corey Taylor and guitarist Jim Root’s day jobs in metal behemoth Slipknot. The hardcore Knot faithful tend to despise Taylor’s Stone Sour hard rock dabblings, but this never prevented the band from generating their own dedicated fans and becoming an autonomous collective in their own right. 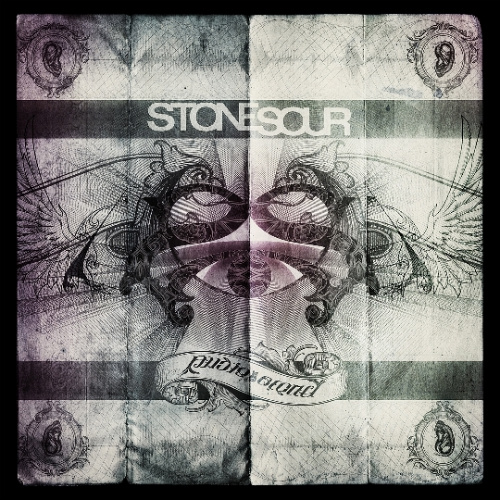 2006’s breakthrough second album ‘Come What (Ever) May‘ was always going to be a hard act to follow. Spawning raucous anthem ‘30/30-150’ and the radio smash hit single ‘Through Glass’, the album sold millions and was a world away from the furious metal audio punch that was Stone Sour’s eponymous debut in 2002. As a long time Corey Taylor fan, (having seen Slipknot live three times and Stone Sour twice) this reviewer was sceptical about the direction Stone Sour would take after such vast success and the generally mixed reception fourth Slipknot album ‘All Hope Is Gone‘ received in 2008.

So what’s changed? In short, a lot. Audio Secrecy sounds vastly different to both previous albums, all songs able to be divided into two camps of slow-burning ballads and fast paced rocky romps, The Chris Rea tinged first single ‘Say You’ll Haunt Me’ is a tight, catchy pop song that could just as happily do the rounds on indie and light rock music channels as the metal charts.

Genre-straddling aside, thematically, it wouldn’t be incorrect to classify ‘Audio Secrecy‘ as a collection of love songs. Taylor’s recent divorce and subsequent remarriage have clearly informed much of the album’s lyrical content, such as the slightly saccharine “I held you close / ‘til I could barely breathe,” from ‘Hesitate’ and “you were so perfectly imperfect” from ‘Imperfect’. Taylor’s vocals are more accessibly honed than past efforts; his gruff yells replaced with more melodic vocal stylings whilst just as powerful, lack the conviction and brutality of say, ‘Get Inside’ or ‘Reborn’.

The overall album production is cleaner and more stripped-back than ever before, resulting in a crisper and more concise sound. The whole release sounds sophisticated and newly mature, yet the gritty rough charm that so characterised Stone Sour has been mislaid during the journey. Their newly slick sound, complete with catchy rhythmic hooks has streamlined them for further mainstream success, but many fans will miss the heavier riffs and cryptic, metaphorical lyrics Taylor and company built their reputation upon. The promise of radio-friendly hard rock hinted at by ‘Come What (Ever) May‘ comes full circle with ‘Audio Secrecy‘, which will convert and alienate fans in equal measure.