While they may never shrug off the moniker, Corey Taylor’s “other” band have certainly carved out a well-respected place of their own in the land of hard rock and honey, and their latest release sees the band at their most ambitious yet. ‘House Of Gold & Bones Part – 1’ is the first instalment of a double-length concept album chronicling the trials of a young man as he comes to terms with the question of whether to grow up or to stay an adolescent forever. The concluding part is set for release in May 2013. 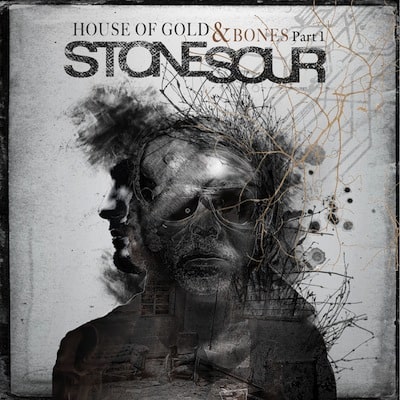 The over-production which plagued much of ‘Audio Secrecy’ has been dialled back and, whilst this is far from a raw sounding record, the release is much the better for it. There has been one minor line-up change, with Rachel Bolan standing in admirably on bass, but you could be forgiven for suspecting more personnel changes as there is evidence of a definite leap in the technical work on display.

The CD kicks off in epic fashion with ‘Gone Sovereign’ which pounds out the band’s intent whilst Corey crows “Nobody’s laughing now”. One could question the logic behind opening the album with both tracks from the double A-side EP which was released back in August, but the one-two punch completed by ‘Absolute Zero’ certainly makes for a striking introduction to the planned double opus. If someone were to query if Stone Sour had a signature sound then ‘Absolute Zero’ would be the ideal exemplar, complete with chugging riff, Slipknot-style breakdown, and soaring chorus.

‘A Rumor of Skin’ then bounds on past sounding like a definite future single before the pace drops with the first nod toward this being a concept album. ‘The Travellers – Part 1’ begins to emphasise that there is a story lurking behind all of the bluster here. ‘Tired’ continues the trend with a track bordering on cheesy in its rock opera balladry, but before everything gets too near to pantomime territory ‘Ru486’ wrenches us into the midst of one of the heaviest tracks Stone Sour have ever blessed our meek little eardrums with.

From possible heaviest Stone Sour tune ever we go to possible best Stone Sour track name ever with ‘My Name Is Allen’. We’re sad to report however that this is not a love song about one man’s obsession with his caravan. On the plus side though the lightly picked intro to ‘Taciturn’ draw us back into the realm of storytelling, something it seems Corey is actually quite the dab hand at.

‘The Travellers Part 2’ would seem a natural conclusion to the album with its repetition of earlier themes and melodies. It is a much weightier number than its earlier counterpart and the build to epic conclusion would make an apt finish to the first part of ‘House Of Gold & Bones’, but Corey and his merry band of miscreants have other plans. The decision to end the release uncharacteristically with the up-tempo beast ‘Last Of The Real’ is pretty much a stroke of genius. Not only is it a personal favourite, but it is also one of the shortest tracks and contains the most abrupt ending on display here. The effect of the sudden and unexpected ending, just as the adrenaline really starts pumping, is that it leaves you desperate for more, and with the nature of this kind of double release, it is the ideal climax.

‘Audio Secrecy’, on first listen, seemed full of anthemic floor-fillers but ultimately it lacked cohesion and staying power, and that is what ‘House Of Gold & Bones – Part 1’ does so well. There is plenty of depth to this release and, with a good half year to wait before the conclusion to this tale, that is absolutely crucial. This will of course be the big question come May 2013: Will we still care and still be keen to hear ‘…Part 2’? I’m willing to bet that a huge number of us will.