“There are many provocateurs here, there, everywhere,” cautioned Vyacheslav Mikhailovich Molotov. “You should listen to them.” And when the first bass bomb drops and the furious rhythmical barrage signals the beginning of the next wave of underground resistance, the warning from history will sound like good advice. Subsource – the agent provocateurs of electronic punk are here and their latest six cut offering ‘Generation Doom’ will command you to move or go down beneath the revolting, writhing hordes. 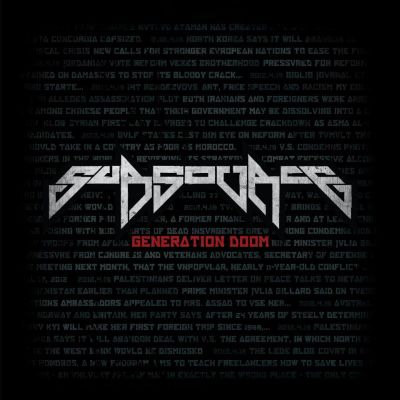 The opening track ‘Molotov’, a potent cocktail of smoldering sub-bass and incendiary beats fused with jagged shards of guitar, is a slow burner, rising up to the critical drop before erupting into life to unleash their unique hybrid sound of dubstep and snarling punk attitude. ‘Lay You Out’ pushes that collective sound a stage further with the introduction of subtle industrial elements to enhance riffs that are reminiscent of the last desperate rotations of the blades on a downed helicopter gunship. Add to this a vocal delivery which at times invokes memories of 1980s anarcho-pacifist punk and the result is a barely restrained rabid, mechanised mongrel. There are metal influences too as demonstrated by the guitars on ‘It’s All I Lie’, but Subsource are accomplished enough never to let their music be so rigidly confined and when the chorus arrives, it is a moment which is both subtly dynamic and genuinely anthemic. And then there is the intensely dysfunctional rhythmic assault of ‘Anarchy’ which captures the rage of a new generation of punk malcontents against a backdrop of malfunctioning steam-hammers, while the final cut ‘Kill The Thief’ issues a metaphorical warning to those who try to steal the underground’s music to peddle to the mainstream masses.

Music like this was never meant to be restricted to vinyl, disc or download, this is music such formats could never hope to contain because ‘Generation Doom’ is simply too much for your speakers or your headphones and if it’s not, you’re not playing it loud enough. But even then, full-bore and screaming, it is still not enough; this is the sound of the digital underground and it is best experienced live through the ruins of towering soundsystems surrounded by convulsing punks, rockers and ravers. And with their reputation as a live act fast growing following some impressive festival performances, there can be no excuses; the provocateurs are here, there and everywhere. Get mobilised because as old Uncle Molotov said; you should listen to Subsource.