To put it simply, this is inhuman music in an inhuman world. Throughout this record, distorted voices caress the ears, cold like steel, singing and shouting with scratching screams and contrasting violent melodies. 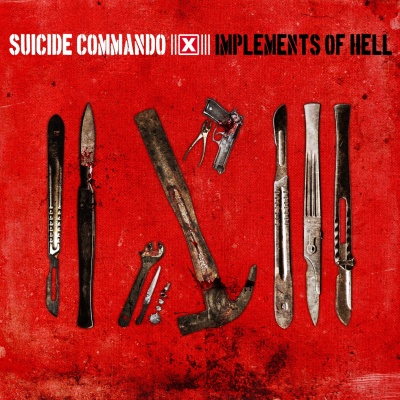 There is no space left for pure flesh and blood in this desolate era except those with a mechanical mind who shake their vibes on dirty dancefloors in dark clubs. Ironically though, Johan Van Roy‘s latest production starts at the beginning with an acoustic sequence taken from an old Hollywood movie; even more ironic is the contrast between this kitsch retro quotation and the evil bitterness which follows like a spitting, terrifically venemous snake. It’s a chilling pleasure for this scribe to listen to a project that stays true to itself and produces a dancefloor-sound remarkable and above other EBM scene drivel – too sharp, too dark, too punk. Although, this album doesn’t create a new experience or make a step forward in development – the receipt and reward embedded within the music of Suicide Commando is in the simple synthie melodies layered upon fat bass and harsh rhythm programming.

The hasty electronic aggression of bits and bytes is accompanied by adequate lyrics: “Lost in a world full of hate / treating you as some dirt / put the gun to your brain” – from the track ‘Die Mother****er Die‘. This new material is based on the life of the perverted serial killer Albert Fish, a human abyss poured in to some alternative dance music. There’s no joy in this and no reason for romantic sounds which are used in this context only to lead the listener astray like in the opening seconds, or for the final melody of the song ‘God Is Rain‘. With this stuff, you’ll never be in the mood to switch on the lights or feel cosy at your local club. This music will consume you, it will take your soul and make it mechanical. This is a good album, as you might expect the distorted vocals don’t vary apart from on ‘Severed Head‘ where a monotonous voice recites. While the album stays very homogenous, it differs with its tempo and sprinkles enough ideas and changes on the top of each track so as to not let the tension be released. If you know SC already then you won’t be surprised but you certainly won’t be disappointed.