post-punk heroes Taking Back Sunday return with fifth studio release, the eponymously titled ‘Taking Back Sunday’, the first to feature the band’s original line-up since 2002’s debut effort ‘Tell All Your Friends’. In those nine long years, the face of emo and its many derivatives has changed dramatically due to the ever-changing tides of popular favour. Regarded, for better or worse, as one of the genre’s figureheads during its mid 2000s heyday, TBS are amongst its most commercially successful. Their last studio album 2009’s ‘New Again’ reached number seven on America’s Billboard 200, cementing their status as being fully absorbed into the USA’s lucrative radio mainstream. Despite this, the relentless energy TBS pour into their live shows, coupled with their enthusiasm for penning perfectly-crafted rock-pop songs has ensured their survival as alt-rock icons, albeit of a zeitgeist moment. 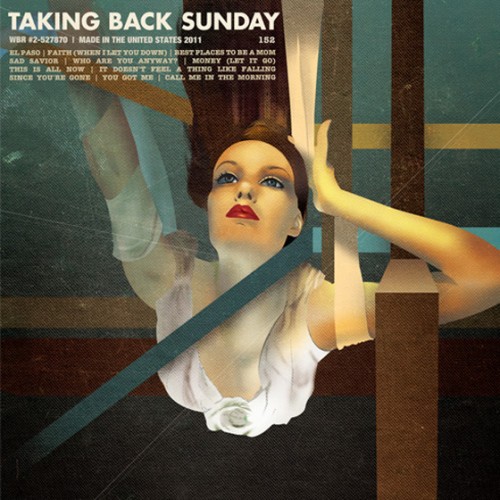 Opener ‘El Paso’ is amongst the heaviest tracks TBS have ever written, as singer Adam Lazarra describing it as “a total motorcycle-raging-down-the-highway kind of song”. Lazzara’s howling over the jarring guitars creates a sucker-punch of screaming intensity, the raw production and subsequent stripped-down energy showcasing a band with a renewed joie de vivre.

Current single ‘Faith (When I Let You Down)’, as featured on the new ‘Transformers’ soundtrack, exhibits remarkable similarities to 30 Seconds To Mars’ ‘Kings And Queens’, namely the soaring vocal harmony. The heartfelt chorus anchors ‘Faith’ within TBS’s finest melodies, incorporating pulsing bass lines with guitar-driven pop riffs. The fitful hooks of old are still present, as are the sing-along choruses. The frenzied ‘Best Places To Be A Mom’ and emotional clout of ‘Sad Savior’ are seeped in Lazarra’s lyrical sincerity, uplifting rather than cloying, and above all, highly listenable.

TBS have always been gifted at distilling intense emotion into irresistibly catchy ditties without venturing into overly self-indulgently territory, a criticism often levelled at their less creative peers. And unlike many of their peers, Taking Back Sunday have gained momentum at a time in their career where many others have stalled. Yet simultaneously, this album offers nothing new to convert those who still think of Lazarra as emo’s poster boy for introspective screaming. Whist there is no grand reinvention on the cards, Lazarra and company  have stuck to and capitalised on the formula that so enamoured them to the teenagers of 2004. Perhaps that’s not such a bad thing.

For more information visit the official Taking Back Sunday website.