Hailing from Bradford, which boasts its own thriving but modest music scene, Talk to Angels are a northern band from whom we can pleasantly proud of and impressed by. Their debut album, ‘This Broken Home’ is an impassioned and impressive effort that delivers. 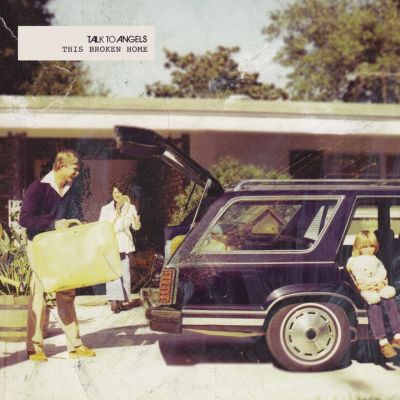 Born out of the last (and the often most interesting) dregs of a party hosted by none other than Embrace band-member Mickey Dale, Talk to Angels were able to develop their sound in the studio almost immediately, and it shows. Crunching and yet melodic guitars, pounding drums, catchy keyboard motifs and powerful vocals that sound like a cross between Keith Murray of We Are Scientists and Green Day’s Billie Joe Armstrong… an analogy which is a compliment to both Murray and Armstrong and also for vocalist Craig Kaye who is great throughout this recording.

Songs about Cilla Black stick in the memory, both for their quirky subject matter and and infectious hooks, while ‘The Unravelling Emotional Boy’ and ‘She’ are tracks drenched in heartfelt cries and soaring choruses… guaranteed songs fit for festival fist-punching in the air. ‘Real’ is a track that The Airborne Toxic Event would be more than proud to include in their repertoire, and is perhaps a prime example of the band’s potential trans-Atlantic appeal and already sophisticated music making style.

Talk to Angels are clearly a band who wear influences on their sleeve, and ‘This Broken Home’ works as a musical smorgasbord of styles ranging from hard rock, melodic and earnest pop-rock with mature lyrical themes and memorable, soaring hooks. The title track is a showcase of all of these aspects and therefore, acts as an emotional song that we can easily imagine would be an absolute belter to see played live. Meanwhile, our standout on the album, track number seven declares proudly ‘I Am King Here’ (which incidently, is this tune’s name), and we can place a pretty safe bet that Talk to Angels will reign in the Yorkshire rock scene in the near future.

For more information visit the official Talk To Angels website.