It would be reasonable to assume that any band that lists their hometown as “heaven” and their band interests as “psychedelic drugs” is probably going to sound a little spaced-out, and Technicolor Teeth prove that to be the case with their debut album ‘Teenage Pagans’. 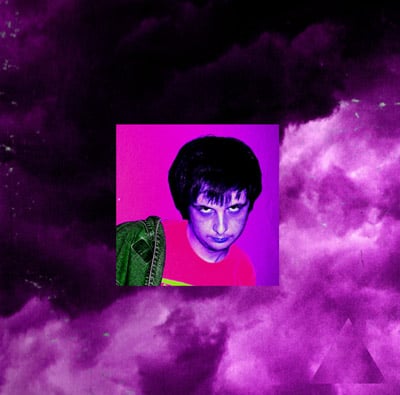 The record begins with ‘Magick Sunlamp’, a heady rush of sweeping guitars and cooing vocals that brings to mind My Bloody Valentine. ‘Crystalline’, meanwhile, ramps up its fuzzy riffs while slyly tipping a wink to 60s girl groups, and ‘White Mother’ starts out aping The Horrors’ ‘Who Can Say’ before ultimately working itself into an all-encompassing haze. The album is at its best when it pairs the band’s shoegaze influences with crunching rock riffs, as on the grunge-indebted ‘Is It Warm Enough For You?’ and the raw, scintillating buzz of ‘Station Wagon’.

Unfortunately, ‘Teenage Pagans’ isn’t a record without problems. Sometimes, it doesn’t really do enough with its ideas – as on ‘Burning Bath’ a queasy interlude that sounds like someone playing ping-pong in a haunted house before ending far too abruptly. In other cases, the band spend too long cutting to the chase – there’s a huge, crunching payoff at the end of ‘At Home In A Coma’, but you have to trudge through four minutes of sluggish ambiance to get there. And then there are times when the payoff never comes at all, as with the languid, directionless ‘Any Kind Of High’, which attempts to use an increase in volume as a substitute for any sort of inspiration. It’s a shame, because the strung-out, sun-baked acoustic melancholy of ‘Aunt Deborah’s Story’ would be a welcome change of pace, were it not sandwiched between the aforementioned pair of tedious tracks.

‘Kiss Lighter’ sees the record stumbling back to its feet – the old “crank up the volume” trick is here again, but fortunately it’s accompanied by some semblance of melody. The injection of pace provided by ‘Snowblind’s scuzzy guitars is sorely needed at this point, and at least the band manage to go out on a high thanks to the driving riffs and contrasting sonic textures of ‘Milk And Melatonin’. As a whole, ‘Teenage Pagans’ isn’t quite the complete package, taking a bit of a dive in quality halfway through – but there’s certainly enough of interest here to make it worth a listen if you fancy some psychedelic garage rock with shoegaze influences.