Psychoanalysts have long debated Freud’s contentious maxim that there are no such things as jokes. The Viennese pioneer himself asserted that jokes serve only one of two purposes, aggression or exposure; the hostile gag, which includes satire and defence mechanisms, and the second, the ribald or dirty joke. Thus the unconscious uses humour as a complex process of denial and yet, simultaneously, as an expression of unresolved rage. A more fascinating case study for budding Freudians, then, than Tenacious D would be hard to imagine. 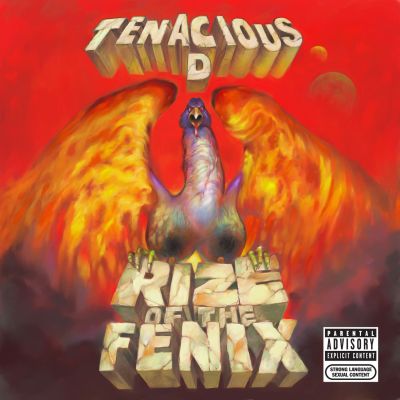 Filth? Check. Profanity? And then some. Satire? Most assuredly. Unresolved rage? Might be stretching things but a high-degree of venomous piss-taking is certainly observed. Yes, the surreal absurdist expositions of Jack Black and Kyle Gass return with a third helping of Tenacious D’s mock-rock ruminations.

It’s a tricky thing, being a parody act, and while one could credibly argue that Tenacious D isn’t strictly such, in the absence of a suitable pigeon-hole, parody will have to suffice. Yes, a tricky thing indeed. Once the novelty has passed and the audience are familiar with the band’s shtick, it’s all too easy to quickly become predictable, tired and leave the fans jaded and asking, “yeah, but now what?” Given that, Tenacious D most likely has only a limited shelf-life. Indeed, the band themselves have discussed pulling the plug and going out on a high. Or whatever the gutter equivalent of “high” might be. It might be a good idea, therefore, for fans to make the most of ‘Rize Of The Fenix’. It could well be the band’s last album.

You know what to expect and there isn’t anything new or groundbreaking here but what there is, is inarguably as clever and as sharply-observed as we’ve come to expect. The faux-folksy whimsy of ’39’, with a distinctly country-genre feel, is as funny as anything they’ve previously written while the shock-factor, all the more effective when delivered in Black’s slyly mock-earnest falsetto is probably demonstrated to best effect on the barely-one-minute-long excursion that is charmingly titled, ‘They Fu**ed Our Asses’. Yeah, you read that right…

All the duo’s favourite hobby horses are ridden and ridden hard. The music biz, natch, human relations of the more carnal type and genre in-jokes covering rock ‘n’ roll, country and metal, obviously, and the stereotypes of inter-band relationships are lampooned with a vicious glee that is difficult to resist. The stand-out moment, ironically, is not a song but a verbal sketch between the two principles concerning devices that might be deployed to assist their elevation to the next level. ‘Classical Teacher’ is outrageous, barking-mad and incontrovertibly side-splitting.

If this turns out to be the swan-song, then they’ve saved a lot of the best ‘til last.