Canadian synthy-goth-rock act The Birthday Massacre are now well-established and – dare we say – veteran performers; a mantle which brings a high level of expectation from critics and fans. So, with that in mind, we have to consider: Is their new album ‘Hide And Seek’ off the boil in any way, or displaying any signs of creative stagnation? 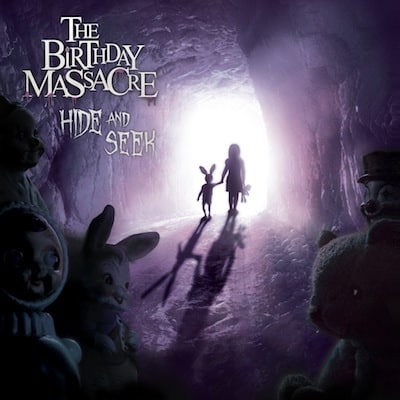 Legendary producer and performer Dave Ogilvie remains on the mixing desk and now seems an almost integral part of TBM’s sound; though obviously not as much so as Chibi’s outstanding vocal performances, which are very much the band’s unique identifier. It’s certainly hard to believe that their latest release ‘Hide And Seek’ is “only” TBM’s fifth studio album, which is indicative of just how firmly they’ve stamped their trademark sound upon the alternative scene.

Is this album a departure from TBM’s usual sound? If anything, the tone is slightly darker than prior releases, though that’s a relative term of course: TBM are still somewhat poppy, beautifully haunting, and highly polished. The band’s albums are always an absolute pleasure to listen to on good equipment, due to their faultless production qualities. In a slightly different world, and with a larger, mainstream and more aggressive record label pushing them into the spotlight, it would not be too hard to imagine TBM catching the ear of a much wider audience. Such a move would probably result in the removal of the band’s sorrowful tone and any real instruments from the line-up though, so would be too high a price to pay.

If we were to level criticism, it would be that this album isn’t quite as catchy as prior releases, and seems to lack some of the “sing-along” qualities of other albums. We still find ourselves randomly humming older tracks such as “Shallow Grave” from time to time, but are not convinced that the tracks on this album are as infectious.

Standing somewhat proud of the rest of the album, ‘Play With Fire’ is a track worthy of special mention, as it brings something new to The Birthday Massacre party – shoutiness. It’s interwoven with Chibi’s more usual dulcet tones, but it is an interesting an unexpected turn of events which we really enjoy.We are briefly tempted to put the kettle on around three quarters of the way through the album when exposed to a couple of rather “typical” TBM tracks, which seemed a little too comfortable and effortless. Fortunately, ‘Cover My Eyes’ then robs us of the energy and will to do so; being such a gorgeously mellow track that’s it’s hard to do anything except smile wistfully while listening to it.

Cutting back to our original question: Is this a release that shows any signs of tiredness, or are the band trapped into an overly stereotyped sound? We’re pleased to report not. TBM have racked up yet another polished performance, in keeping with their established style, yet with new influences and fresh tones.

The album leaves the listener feeling clean and refreshed. It’s more wind-down and chill-out music than “get ready to party” stuff, but it’s a great sound, which is highly emotional without making the listener feel bad about it. Though sad and mournful in places, The Birthday Massacre continue to offer listeners and uplifting and inspirational sound.